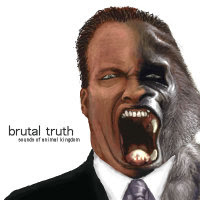 Brutal Truth
Sounds of the Animal Kingdom
Relapse
1997
Anal Cunt were grind’s clown princes, but Brutal Truth reigned from the dopethrone as philosopher kings, dispensing bromides of wisdom only partially obscured by veils of pot smoke.
Long before Cephalic Carnage coined the term “Rocky Mountain Hydro Grind” these New Yorkers were unloading searing bong hit after bong hit of metal perfection.
Brutal Truth helped define grindcore on their first two essential albums as part of the impressive Earache stable, but it wasn’t until they swapped drummers and labels that grind’s potential really shone through.
From its punker than thou roots, grind was suddenly allowed to grow up a little bit, maybe read anthropology text or two, spend a college semester getting really into jazz or world music. Nobody here is going to dispute the simple joys of 90 second bursts of ear splitting racket, but Sounds of the Animal Kingdom found the New York quartet making a case to take grind seriously as, gasp, art.
Brutal Truth’s “Collateral Damage” may hold a Guiness world record for shortest music video at 2 seconds and some change, but the band was at its absolute best when they bucked grindcore’s brevity to truly stretch their legs. And Sounds finds the band at its most limber. “Pork Farm,” “Jimenez Cricket” and “Fucktoy” scale back the speedy chug and snapping tempos to introduce something actually resembling texture and dynamics into a grind tune. Throw in some blistering metal, a Sun Ra cover and the 30-some minute headfuck that was “Prey” and you’ve got a grind milestone unlike any seen before and rarely rivaled since.
Now a decade after Sounds of the Animal Kingdom’s release Brutal Truth reunited (with Lethargy/Sulaco guitarist Erik Burke standing in for Gurn) because, for some of us, grindcore still isn’t loud enough, still isn’t fast enough.
Posted by Andrew Childers at 7:36 PM