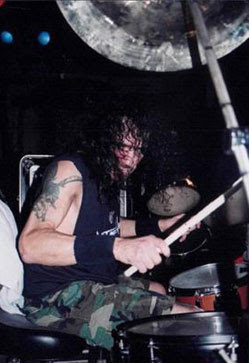 Pete Sandoval didn’t even know what to call the racket he was kicking out on his first drum set in 1984 in Los Angeles.
Two decades on, Terrorizer is synonymous with grindcore, but the "Grind/core/Death/Speed/metal" noise they banged out didn’t even have a name when Sandoval unseated a drummer named Fishe to cement the band’s lineup.
“Finally I could do what I wanted to in a pure Grindeathcore guitar hellstorm! I loved it!” said Commando, who had been playing in a band called Merciless Death Squad at the time.
And while no list of the greatest drummers in metal could overlook the Terrorizer/Morbid Angel skinsman, Sandoval and a small coterie of L.A. bands during grind’s formative years can also be credited with breaking metal’s cultural line.
As uptight crypto-racist demagogues are calling for the roundup and deportation of anybody with more melanin than an Irish albino – regardless of legal status – it’s important to remember how Hispanic musicians helped birth grind. A full 15 years before MTV afflicted us with Ricky Martin, grind had its own Latin explosion going on.
Metal as a whole was just coming into its international own in the mid-80s, but aside from Suicidal Tendencies’ revolving door and the Spanish speaking half of Slayer, it was still very much a middle class high school white guy scene in America.
“Well, I guess most white guys were interested in heavy metal and glam rock while on the other hand the Hispanic musicians were busy writing sick stuff and having gigs anywhere they could,” Sandoval said.
“East L.A. was full of Hispanics before I moved to Tampa in 1988. There were tons of bands from that area and it meant that most bands were made of mostly Latinos and a few white guys that joined the extreme metal scene. I could mention to you bands like Sadistic Intent, Darkness (all Latinos), Terrorizer (all Latinos), F.C.D.N. Tormentor (all Latinos). I mean, I could mention to you at least 15 bands which are formed mostly by Latinos!”
That list would also include Excruciating Terror, Resistant Culture (known as Resistant Militia then) and the mighty Nausea, featuring Terrorizer throat Oscar Garcia.
It seems inevitable L.A.’s racial cauldron would open metal’s narrow doors to new viewpoints and cultural experiences. 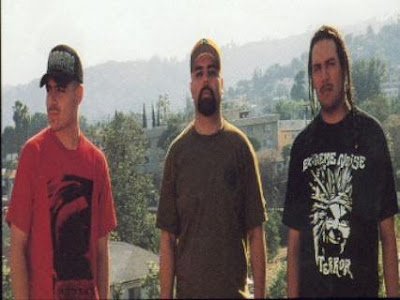 “We have a little bit of everything here, a microcosm of the world,” Excruciating Terror guitarist Jerry “Roadkill” Flores said. “We have people here from every part of the world here. It is very segregated though. By government design of coarse. Just like any major city, the government creates ethnic ghettos. The segregation is residential. People do of course interact. It would be impossible not to.”
It was in that “ethnic ghetto” Flores met Martin Alvaro and Victor Garcia, the other two thirds of E.T.’s lineup, which even briefly included a young Dino Cesares of Fear Factory/Brujeria fame.
“We all went to the same schools and are from the same area, North East LA,” said Flores, who is still active with a new band, Bloody Phoenix. “We all lived about 3 miles from each other. I had known most since junior high. Looking back now, it's clear we all had different plans/goals. Speaking only for myself, from day one I just wanted to make music, record it, travel with people I could have fun with and meet all my pen-pals that I had had since I was about 13.”
Grindcore’s hybrid nature also forced upstart bands to mix up their social circles, which helped broaden its appeal and introduce new voices. There was no grind “scene” in L.A., Sandoval and Flores agree. Rather mid-80s grinders, who didn’t really know what to call their hellacious racket, were forced to carve out space on punk and metal bills to get their music heard.
“L.A. has had a steady influx of grind bands since the mid ‘80s. Most of those early bands didn't know what they were playing would eventually be called grindcore,” Flores said. “But at no time during that time would I honestly be able to tell you that there was a huge grindcore scene in L.A. Grindcore bands usually played death metal shows. It was weird. Too punk for metal, too metal for the punks. During that time it was much easier to get on a metal show than a punk show though. A lot of punks, not all, were elitist snobs who wanted nothing to do with us.”
So what are we to take from this little stroll through grind history? Latinos, like all other blast beat junkies, were just looking for an outlet for all the frustrations, petty and cosmic, that come with being part of the human species.
“Maybe it's the purity of it,” Flores said. “It's simplicity. It's intensity. It's anger. Things people from any background can feel and understand. Maybe it's the fact that in grind you don't hear about dragons or about how much money you have or how many women you've abused or Satan. Grind is honest and humble.”
We broach the possibility this whole exercise is just recursive post modern bullshit with Flores and he happily agrees.
“I am Latino,” he said. “I identify with Latinos, obviously. But I consider myself human before anything else. We are all one race, human. By breaking us down into groups you divide us. Division is our downfall as a race.”
Posted by Andrew Childers at 1:19 PM