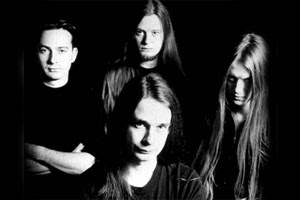 With Valentine's Day in less than a week, it's never a better time to remind ourselves our loved ones are little more than future carrion, destined to rot away. Carcass dwelled heavily on life's seeming pointlessness on Necroticism's third track, "Symposium of Sickness," which really, c'mon should have been the title track to Symphonies of Sickness. That or somebody just got lazy with titles. Either way, nihilism never looked so wordy.
An encloaking, dark epoch
In which all life is not appraised
Another valueless commodity
On which the rapacious may feebly graze
Indebted homage to their mammon
Whilst the mort is the music of the meek
Transcendence from a beautifully brutal reality
Is what we seek
Noxious, sully dolour
Is not the sentiment upon which we feed
But precocious consciousness
Draws out a morbid nous to bleed
Chiselling out seething words
Which cut deep to the bone
Always legible
So be it on our own headstone
Rising to our nadir
Reality we try to extirpate
Trying to raise a twisted smile
Similar to that silver plate
On a coffin which is joined
Hammering in each final nail
Last kill and testament
Left now intestate
Noxious, sully dolour
Is not the thesis which is bled
A precarious train of thought
In which mental cattle trucks are led
Carving out skillful words
Always spelt out well
We can't just leave the dead alone
Monographic text
A terminal doctrine of diseased minds perplexed
Enunciated epigrams
Eschatological, rotten requiems
Epoch -- n. A particular period of history.
Dolour (American English, dolor) -- n. Sorrow or grief
Precocious -- adj. Unusually advance or mature.
Nadir -- n. The lowest point possible (Not to be confused with Ralph Nader who just keeps sinking lower).
Extirpate -- v. To exterminate, destroy utterly.
Intestate -- adj. Dying without a will.
Monograph -- n. A treatist or study written on a single subject.
Epigram -- n. A short, witty statement.
Eschatology -- n. Theology or doctrine dealing with death, judgement or the end of the world.
Requiem -- n. In Catholicism, a mass celebrated for the dead.

Posted by Andrew Childers at 11:32 AM