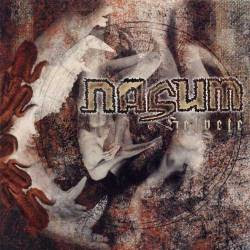 Nasum
Helvete
Relapse
2003
You could argue Nasum saved grindcore.
Napalm Death bassist Shane Embury, who guested on a pair of Helvete’s tracks, has famously credited Nasum with the posterior nudge necessary to set the elder statesmen back on the true path of grind.
After a dizzying half hour spent with Helvete, it’s not hard to see why. Mieszko Talarcyk was grindcore’s single most talented and consistent songwriter, cranking out album after album of hellaciously catchy blastbeat anthems with co-conspirator Anders Jakobson. On their third full length the song writing tag team crafted their most memorable collection of jams, 22 tracks of seething anger and political frustration.
If that weren’t enough, Talarcyk was also one of metal’s most accomplished producers and Helvete has his loving fingerprints all over it. Helvete boasts the band’s thickest and clearest recording, propelling the band’s ferocious onslaught right from opener “Violation.”
Nasum’s third full length is by far the band’s best sounding outing, with thick, ripping guitars, snapping drums and rumbling bass by Jesper Liverod of Burst.
By now the story of Talarcyk’s untimely death during the December 2004 Pacific tsunami while vacationing with his girlfriend has been endlessly retold. His legacy is an astonishing 256 tracks of frighteningly consistent grind spread out over six discs. Musicians with careers three times as long have failed to touch his astounding output, but it’s Helvete that will stand as his, and the band’s, masterwork.
Posted by Andrew Childers at 9:48 AM