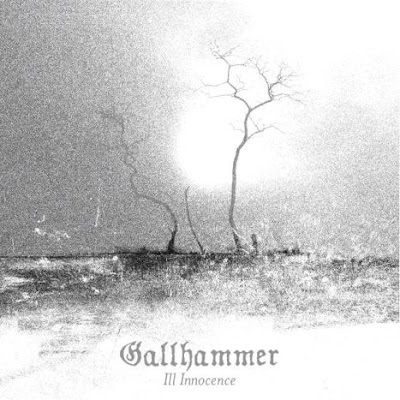 Gallhammer
Ill Innocence
Peaceville
I meant to review these delightful doom pixies several months ago, y’know when this album actually came out. But after scouring several stores and being back ordered (twice) I just now got my hands on this solid, if rough, mash of Amebix and Hellhammer. I thought about skipping it, but Terrorizer just gave them a cover, so why not?
Yes, these Japanese sprites have a deep love of the crust, and that’s we’re gonna focus on. Instead of being yet another retread doom band or a novelty chick act, Gallhammer are mix up all of their influenced on their first international LP to craft a sound that is endearing in its wide eyed naiveté
The latest version of “Speed of Blood” comes off a little crisper if no edgier and “Delirium Daydream,” with its strummed acoustic intro, and “Ripper in the Gloom” chug along at mid-tempo punk speeds with crusty, grarled guitar lines screeching through the feedback laden mix. But one of the album’s most delightful moments is the third track, “Blind My Eyes,” a rawking punk number that channel’s Melt-Banana right down to the charming chirped Pokemon vocals.
The whole 50 minute affair is bookended by straight up sludgy doom such as the aptly titled penultimate track, “SLOG,” an eight minute dirge that goes spelunking in the caves where Stephen O’Malley conjures demon drones. The not quite as aptly titled closer “Long Scary Dream” gets two out of three right. It is indeed lengthy and has a wonderful somnambulistic quality that makes it a great soundtrack to sit down with Neil Gaiman’s Sandman comics, but it fails to evolve from mildly interesting phantasmagoria to outright nightmare.
Overall, Gallhammer have improved leaps and bounds over The Dawn of... proving they are not a novelty act stage managed by Peaceful and turning in an album, with a stunning all white layout, that would sit capably along side the other punky doomsters in your collection like Unearthly Trance.
Posted by Andrew Childers at 1:14 PM