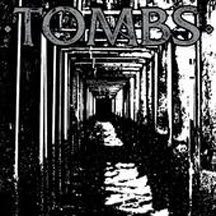 Tombs
Tombs
Black Box Records
A decade into his musical career, we can confirm Mike Hill is Not A Happy Camper. In fact, the guy has a channeled a lifetime of grey skies into some of the most abrasive music burned to disc and scored to vinyl and the beatings have not let up with his latest project, Tombs.
The second gen noise monger has been a busy d00d since dissolving the singularly cathartic Anodyne, debuting three new bands with a fourth – his power violence reunion with Dave Witte – King Generator expected this summer.
But the band at hand, Tombs, almost literally picks up where his previous project, the short lived Versoma with LickGoldenSky six string strangler Jamie Getz, faded out. Swirly riffed lead off track “Fountain of the World 666” captures and extends the vibe of Life During Wartime closer “Come in Alone,” proving nobody kills like a white man from Brooklyn with a guitar and a massive chip on his shoulder. Hill frosts the moody, squonky cake that is “Fountain” with a layer of Slayerish double kick at the end, courtesy of drummer Justin Ennis.
While many of the Tombs tracks were penned for Versoma, the new band is clearly not content to rehash past projects. The songs may roar along a similar rusted, guttered and frazzled subway track for a guided tour of NYC’s benighted boroughs, but overall all Tombs has a much harsher vibe than the astonishingly hummable Versoma work.
Not since Helmet’s Paige Hamilton has a musician funneledthe seething grime and claustrophobia of Scorcese’s festering Big Apple like Hill. Though he has filed down Anodyne’s rougher angles, Hill’s guitar work still creeps along on mathy parabolas of and sine waves of melody and dissonance.
The triple threat songwriter/producer/label owner has more than a little in common with basement lurking isolationist korpsepaint commandos. Though Hill recruits other breathing bodies to round out his sound, his work is always the product of his single, focusesd – but extremely jaundiced – artistic eye. Far from his career’s epitaph, Tombs bodes well for Hill’s progression and I can’t wait to see what emotional graves his robs next outing.
Bonus Review: On a wholly unrelated packaging note, Hill has issued both the Tombs and Asra (more on them soon) albums in deluxe versions that include both the heavy grade vinyl and CD formats for those who may be on the format fence.
Posted by Andrew Childers at 6:54 PM