“He Blossoms into Womanhood”: Amazing Cretin Story in Decibel 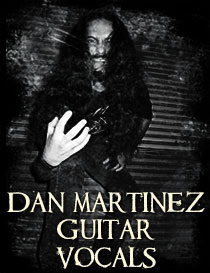 I’m not normally in the business of sending you off to read someone else’s work (cuz you're here to stroke MY ego), but the July issue of Decibel has an excellent feature on Cretin frontman Dan Martinez’ transition to Marissa Martinez. (No link available just yet, but go read it.)

Back at my first reporting job in one of Maryland’s more benighted rural areas, I did a series on gays living in small towns. One of the first people I found was actually a transsexual who was still married to her wife of 30 years (take that gay marriage opponents). It was an amazing interview with both of them, learning how this 40-something correctional officer slowly became a woman and how her wife, one of the most frighteningly cheerful and well balanced people I’ve ever met, dealt with this shattering transition. It also sparked the greatest letter writing campaign in the paper chain’s history (many of which included some interesting if hilariously uninformed speculation about my own sexuality).

“Slipping hormones in his food/ He blossoms into womanhood”

There are plenty of knuckle-dragging homophobes roaming the metal scene, but hopefully everybody will give Marissa the time and the space she needs to fully grow into her (new) own skin and hopefully (Please! Please! Please!) hit the studio again. It took Cretin 14 years to pound out their Repulsion worshipping first album, here’s hoping we don’t have to wait another decade for the their follow up.
In the meantime, hit up Cretin and drop Marissa a note of support. (I already did). The guy’s obviously been putting his own insecurities into his songs, so it’s the least we can do in return. Good luck, Marissa.

“He thinks I’m saving money for his college education/ I plan to use the money for his sex change operation”
Posted by Andrew Childers at 8:48 PM

Nice article. Marissa rocks like no one's business. The metal scene seems to be getting more open minded.. let's hope so.

The metal scene is getting more open minded, there are so many bands now. As long as it's good, heavy and real it should not matter. Now if it had been Kerry King, it might have been another matter. Hail Cretin!

"there are so many bands now"

Pro tip: this is a bad thing.

Metal is for the elite.

(Not that Cretin, or Melissa, are/is shit).