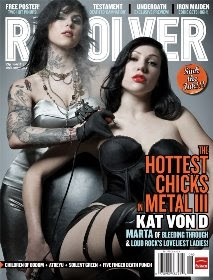 [rant]
Call me a PC asshole if you want, but there’s something that’s been seriously annoying the piss outta me lately as metal seems to be trying its hardest to become another bloated, single driven wasteland of focused grouped mall metal chart sludge. There are already too few chicks mixing it up in the metal/punk pit so can we please stop trying to turn them into fucking pin ups. Can we just talking about the fucking music?
What inspired this completely pointless aside was getting stuck in line at an FYE recently. I never read Revolver, cuz, ya know, it sucks the fungus from a hobo’s toes. But trapped in line I noticed the rag proudly announcing its third annual hottest chicks in metal spread. Like pretending to be Maxim is gonna hide the fact that Revolver’s days are numbered once this spate of Wal-Mart approved metal inevitably farts itself out (am I the only one who remembers when oversaturated thrash imploded in 1991?).
We’ve already seen this trend with Fuse’s annoying “Mistress” Juliya Chernetsky, host of Uranium and, briefly, Metal Asylum, who played up her ridiculous wannabe bondage kitten persona as though that made her more “metal.” This is already people’s perception of who we are and it’s really fucking sickening to see that same trite crap being peddled by a magazine that at least likes to pretend it’s in touch with the underground.
And, predictably, a few days after spotting the mag, I get labels like Nuclear Blast sending out 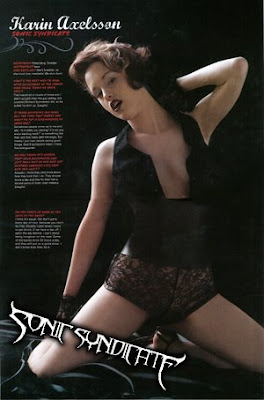 breathless press releases announcing “SONIC SYNDICATE's KARIN AXELSSON - ONE OF THE HOTTEST CHICKS IN METAL.” Sure pushing a band as lazy, manufactured and Hot Topic-ready as Sonic Syndicate is a thankless business, but if one member’s looks is the best pitch they have, there must be reason I haven’t bought a single Nuclear Blast album in about five years.
Even Resound, Relapse’s in house catalogue/propaganda mouthpiece has just added a lame ass “Miss Resound” centerfold where sad, tattooed metal chicks pose in carefully obscured wannabe sexAY poses a la Annie Leibowitz for poor rendered black and white spreads with a brief into about HOW TOTALLY METAL! they are.
Surprise, surprise, we’re not putting … how to say this generously? … metal’s less than physically perfect Adonii through the same beauty pageant bullshit treatment. Anybody want to see a spread of Shane Embury or Gene Hoglan half nekkid? Anybody who read Decibel supreme lampooning the whole idea in its August 2007 edition with its disturbing “Hottest Doods in Metal” photo spread knows there’s not enough eye bleach in the world.
I came into all of this from the punk side of the family tree, where female participation was actively encouraged. My musical foundation is underscored by a solid layer of Victoria Scalisi (Damad), Jo Bench (Bolt Thrower), Kirsten Patches (Naked Aggression) and the absolutely raging Alyssa Murry (Disrupt) and I’m encouraged by recent entrants like Gallhammer and Angela Gossow, who can clearly hold her own among the boys. So can we at least pretend we’re not the knuckle dragging basement dwelling troglodytes everyone thinks we (OK that blackmetallers really are)?
[/rant]
Posted by Andrew Childers at 1:07 PM

Well just go enjoy your coldplay because you clearly have no idea what your talking about. Sonic Syndicate is an amazing band with so much talent. more talent than your will ever hope to have. who the fuck cares if bands are posing like that. it is to get there band a little bit more publicity. i mean, what band wouldn't. she is unreal at bass guitar. oh and you havent bought a cd from nuclear blast!! you obviously know nothing about metal because they have some of the greatest band today! oh and one more thing... i bet you take it up the fucking ass!!

Looking for a photo of Alyssa Murry for a Women in Grindcore/PV feature I'm going to put up soon and found this; haven't gone through a lot of the older entries, so this was cool to see. Awesome input, and a positive point to this is that it does seem like things are getting better in some respects, with bands like Suffering Mind, F.I.D, Lycanthrophy, and others coming on the scene.

Also, that anonymous comment made me lol. That homophobia at the end's REALLY helping his or her (who am I kidding, HIS) cause. Also, Coldplay? REALLY?