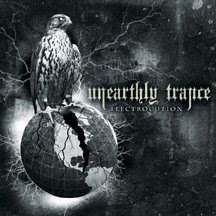 Unearthly Trance
Electrocution
Relapse
I’m still not sure what whacky electrophile Nikola Tesla did to deserve being portrayed by David Bowie in a film as bad as The Prestige, but Brooklyn sludgesters Unearthly Trance hope to at least balance the karmic scales on their fourth platter, Electrocution.
The Serbian tinkerer once predicted he could crack the earth in half if he could find the right frequency, hence the album artwork (how the Maltese Falcon lookalike fits into that, I’m still not sure). And that kind of crust cracking oomph is signature metaphor for the band’s brown note bass workouts.
While not a tremendous leap forward from 2006’s The Trident, Electrocution finds Unearthly Trance striding comfortably through a swamp of Darkthrone iciness, Melvinsly sludge and His Hero is Gone crust, weaving the disparate influences into a seemless whole.
The album’s breakout track is “God is a Beast” – this album’s equivalent of the real life Godzilla nightmare of Sept. 11 that was Trident’s “Wake up and Smell the Corpses.” Despite the song’s title, frontman, magickal misanthrope and principle songwriter Ryan Lipynsky did not pen the tune after perusing Richard Dawkins’ latest tome or wandering into the infamous Pharyngula comment threads. Rather the staggering, creepy crawl tune gets all metaphorical about humanity’s fascination with tossing around the old nuclear pigskin and destroying all life on the planet as we know it. If you're determined to give Allah the finger, I recommend fast forwarding to self explanatory sixth track “Religious Slaves.”
While the album does not make great strides forward considering the band’s past growth from Sunn O))) Jr. drones to crust/black bleeders, Electrocution does feature a few microevolutionary highlights. Lipynsky is clearly much more confident vocally, sliding from buzzing Melvins wail to guttural chug to frostbitten black metal howl seamlessly within songs. Drummer Darren Verni is determined to kick sludgy doom out of its accustomed torpor. Lead off track “Chaos Star” kicks all denim vest and bandana with thrashtastic double bass work and “The Dust Will Never Settle” leaps out of the gate at hardcore tempos that would make Tomas Lindberg smile before coursing straight into full on blast beats toward the end.
In all, Electrocution is an admirable slice of crust punk sludge and doom that charges and crackles like a Tesla coil straight through to closer "Distant Roads Overgrown" with its magnificent climbing staircase riff and electrified fuzz out denouement.
Posted by Andrew Childers at 10:02 AM