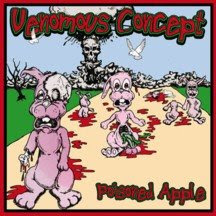 Venomous Concept
Poisoned Apple
Century Media
According to Poisoned Apple’s seventh track, principle songwriter Shane Embury has “A Case of the Mondays.” Other than affirming his love for the collected works of Mike Judge, the Poison Idea inflected tune (Venomous Concept --> Poison Idea – Get it?) gets to the poisoned apple at the center of the band’s second long player, which never manages to move beyond workaday grumbling into out and out rage.
Embury has rotated to guitar while Danny Lilker has slotted into the bass position after Melvins mastermind Buzz Osbourne bid adieu (and wouldn’t ya know it, after Osbourne buzzed off, the band unleash their most Melvinsy cover art: an Apocalypse Now horroscape of aspoloded, bleeding bunnies that will have your kids checking their Easter baskets for IEDs). Danny Herrera (who unleashes some of his better blasts in recent memory) and Kevin Sharp round out the all star ensemble.
The membership musical chairs has meant a slight change in songwriting. Poisoned Apple sounds like post-Earache Napalm Death (especially the Century albums) gone hardcore. Sharp’s roar is as rasping and forceful as ever, boding well for the rumors Brutal Truth may return to the studio (with Lethargy/Kalibas/Sulaco’s Erik Burke standing in for the MIA Brent “Gurn” McCarty). Sharp and Embury give all the usual suspects a thorough lyrical beatdown: war sucks, conformity blows, jobs – who wants those? Yada Yada Yada. But VC are not meant to be boundary pushers but rather a loving tribute to the crusty hardcore that went before. So keeping in mind these trailblazers' best Lewis-and-Clarking years are behind them, there’s actually an enjoyable if derivative half an hour music to be had here.
Posted by Andrew Childers at 6:25 PM