As the Drum Machine Rolls On: How Enemy Soil Broke New Grindcore Ground 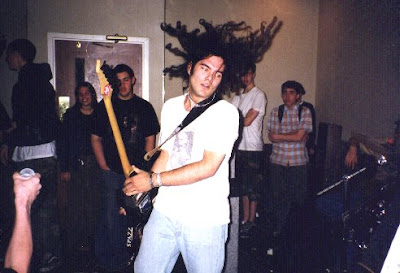 I don’t know if faux filmmaker Marty DiBergi has ever met Enemy Soil, but he would certainly be impressed by Richard Johnson’s punctuality.
I hit up the former Enemy Soil/current Drugs of Faith axe master to talk about Relapse finally reissuing Casualties of Progress, ES’ signature EP and the guy responded to my lazy email in less time than it takes to get a pizza delivered. Problem was I wasn’t expecting that kind of promptness and my copy of Casualties was still stuck in FedEx hell. So some of the questions I send over just to get the convo started were woefully misinformed. Luckily, Johnson is good natured enough to put up with my crap and cheerfully shared insights into what made one of grind’s more interesting pioneers tick.
Casualties of Progress, regarded has a high point in Enemy Soil’s catalogue and a watershed for drum machine grind, has gone in and out of print over the last 14 years. The band’s most highly regarded release was the only thing left off the Smashes the State discography collected by Bones Brigade a few years ago. Stuck in reissue limbo, Relapse finally had the good sense to bring it back into its active catalogue.
“Well, Relapse repressed it several times, I think at least three, back in the ‘90s,” Johnson said. “So it’s not like they wanted it to go away. It was supposed to appear on their Single Series, so they asked us to keep it off the discography, but they seem to have abandoned that series over the years. So it’s time for it to come out again.”
Though he refers to it in the liner notes of Smashes the State as “the infernal machine,” Enemy Soil was inextricably linked to machine percussion throughout its seven year existence and laid the groundwork for the thriving blipcore grind scene flourishing. Even J. Randall, who tagged team with Johnson on Agoraphobic Nosebleed’s best album to date, sang Enemy Soil’s trailblazing praises in the liner notes to the Casualties reissue. While industrial artists such as Justin Broadrick bravely liberated the drum machine from the bowels of disco’s doldrums, Enemy Soil was among the first grinders to really recognize its potential to spit out insanely fast beats.
“We had a drummer when we first started the band and wrote our first songs with him. But that didn’t work out, and eventually I bought a machine so we could record as we couldn’t find a drummer in Sterling, Va. I finally ran across Brian Harvey [who hooked up with another ES alum, J.R. Hayes, to form Pig Destroyer with Scott Hull] as we worked together at a grocery store in the early ’90s,” Johnson said.
“It never grew on me, but I was able to work with it. Early on I wasn’t concerned with whether a person could reproduce live what I was programming but I think I toned that down over time. We were always associated with a drum machine, even after we were playing shows with live drummers.”
Though Enemy Soil, with its Spinal Tap-ian (two references in one article!) rotating cast of characters finally retired the drum machine a decade ago, Johnson was drafted to round out Agoraphobic Nosebleed’s all star drum machine roster (Hull, Randall, and Prosthetic Cunt’s Carl Schultz), joining forces with artists whom he himself had inspired.
“Actually, I’ve taken away a lot from ANb in terms of my vocal style, but at the same time, Enemy Soil was one of the bands that inspired Scott Hull to go for it with a machine for ANb,” Johnson said.
A decade and a half after its first pressing, the guitarist who shattered percussion boundaries still happily stands by the scrappy 7” that set grind on its ass and opened up new avenues to blast beat exploration.
“Hearing it now, it sounds very primitive to me, partially because of the production. Later on we leaned how to add more musicality and more range with the riffs, which improved the music, but there’s also nothing wrong with what we were doing at the time, wearing our influences on our sleeves and cranking the machine up,” Johnson said. “If there’s only a few releases from the band that are essential, I think this is one of them.”
In a familiar motif, Johnson’s current project, Drugs of Faith, is in the hunt for a drummer. Luckily the guy knows his way around a drum machine.
Posted by Andrew Childers at 7:35 PM

Great article! I love most of what the dudes mentioned in this piece have touched!