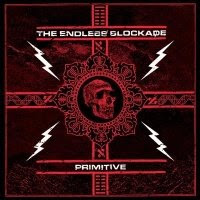 The Endless Blockade
Primitive
20 Buck Spin
Primitive is fucking right. This Ontario power violence collective rages like a pissed off Neanderthal (*nudge, nudge wink, wink*).
Praise Vishnu, power violence has been on the upswing again as this plague of girl pantsed mall metal seems to finally be cresting before the inevitable backlash. Leading the resurgence has been The Endless Blockade, who crest the sine wave bass rumbles that Man is the Bastard left unfinished, mashing together Swan dive two step, bastardized noise and martial blast beats into a frenetic assault on the senses.
One thing that sure is hell is not primitive is the sterling production that graces the album courtesy of Chris Hegge and the ubiquitous Scott Hull. Primitive’s guitars and noise scrape through the speakers with a precise balance of static and clarity, giving the seconds long songs a punchy resonance.Though these Canucks rarely break the minute mark with the frenetic, pounding outbursts that pass for songs, Primitive offers a wide array of tunes, such as the electrofrazzled “Perfection,” which could pass as one of those Agoraphobic Nosebleed interludes in a blindfolded test. We’re also treated to yet another version of the microburst “The Endless Blockade,” whose lyrics are encapsulated by the title, this time barked out by benevolent punk icon Jello Biafra. Primitive closes with “Do Not Resuscitate,” the album’s longest song, a fried fx board creeping crawl of burned out electronics and sputtering vacuum tubes. Sure, that’s been done a few trillion times before, but The Endless Blockade inject fresh blood into the power violence scene, which is enjoying a well deserved renaissance in the 21st Century
Posted by Andrew Childers at 6:12 PM