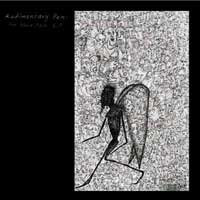 Rudimentary Peni
No More Pain
Southern
“Pachelbel’s Canon in E,” the last track on Rudimentary Peni’s latest EP, No More Pain, may have you wondering if guitarist/artist/novelist/psychiatric patient Nick Blinko has been taking the right meds. Or any meds at all. The tune, a fuzz-drenched psychedelic version of Baroque organist Johann Pachelbel’s “Canon” seethes and scrawls like an amateur stoner rock band on the verge of blowing the fuses in mom and dad’s garage.
The unexpected twist is quite a feat for a band that has consistently pushed punk beyond its … erm … rudimentary limitations for the better part of three decades. It also confirms why Rudimentary Peni is still my favorite punk band.
Their fourth E.P. since 1995’s Pope Adrian 37th Psychristriatic, the band has turned its back on full lengths and pared the fluff from their songwriting, only issuing the best tunes in their queue. The result has been a string of consistently excellent 15 minute bursts of death rock every few years.
And at 20 minutes, No More Pain is the longest of their most recent offerings, blasting out delectable slices of their accustomed doom and gloom, such as the T.S. Elliot referencing opening “A Handful of Dust,” a grating, groaning meditation on death a million anime-haircutted bands in girl jeans would slit their wrists to have penned. But knowing Blinko’s history with mental illness and psychoactive pharmaceuticals, the near suicidal vibe of No More Pain rings more poignant than bratty.
Blinko’s deceptively simple riffs pack enough slice through his lyrical scars, leaving fresh wounds on his psyche during the ZZ Top shuffle of “Doodlebug Baby” and necrotic creak of “The Eyes of the Dead” while Grant Matthews’ busy, burbling bass work propels the songs over John Grenville’s solid drumming.
If you’re still hoping for another Cacophony or Death Church, you’ll be disappointed, but after treading their own dreary musical path for damn near 30 years, Rudimentary Peni’s latest shows a band in full command of its impressive talents forging ahead with a singularly bleak musical vision.
Posted by Andrew Childers at 8:45 AM