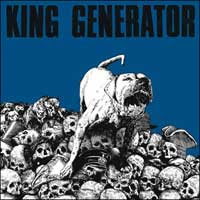 King Generator
King Generator
Tankcrimes
Mike Hill is a man who knows his way around a studio and his tenure with Anodyne, Versoma and Tombs to date has shown him consistently able to squeeze out Godzilla sounds on a Geico Gecko budget. All that is to say we’re gonna give the man a pass on King Generator’s self titled mini album, which sounds like it was recorded under a pillow in a room full of feathers. I’m assuming that’s got to be deliberate given King Generator’s throwback hardcore style and Hill’s track record behind a mixing board.
I’ve slotted this eight minute barrage between later Capitalist Casualties, Asshole Parade, Slight Slappers and Battletorn on my mp3 player, all of which serve as sign posts for King Generator’s blown out style.
Hill’s bass bleeds into Jamie Thomson’s (The Process/Shank) guitar lines, creating a nearly indistinguishable wall of fuzz while Dave Witte (every significant fast band in the last 15 years) blasts, thumps and whumps his way though all eight sweaty minutes of rapid tempo hardcore.
There’s nothing here that you haven’t heard a bazillion times before – Thomson unintelligibly barks and spits foam while the band chugs away at speeds pushing human endurance limits – but the trio, all of whom have toiled in DIY music since fastcore’s formative years, have the cred and the focus to pull it off successfully, and the album’s short run keeps tedium at bay even when they pull done-to-death stunts like slotting the three minute, down tempo song at the end of the album (“My One Regret”).
As with Hill’s Tombs project and ASRA’s debut on his Black Box label, Tankcrime smartly included a CD version with the single-sided 10-inch vinyl for lose lacking the 1s and 2s at home.
Some of these guys’ recent projects, such as Sino Basila or Hope Collapse, have regrettably been one-off projects rather than going affairs, but King Generator ably reach back into their collective experience to produce an eminently listenable collection of retro tunes. Here’s hoping this generator hasn’t run out of steam after one outing.
Posted by Andrew Childers at 8:00 PM

I am the sort of hombre who passions to try fresh things. Currently I'm manufacturing my personal photovoltaic panels. I'm doing it all alone without the help of my staff. I am using the net as the only way to acheive that. I saw a truly brilliant site that explains how to make photovoltaic panels and so on. The internet site explains all the steps involved in solar panel construction.

I am not sure bout how precise the info given there is. If some people over here who have xp with these things can have a see and give your feedback in the page it would be grand and I'd extremely treasure it, cause I really enjoy solar panel construction.

Thanks for reading this. You people rock.