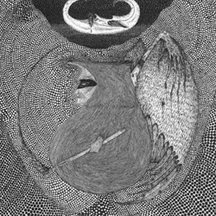 Iron Lung
Sexless//No Sex
Prank
2008 will be remembered as a fine year for power violence and the vintage Iron Lung stomps out is particularly delectable.
Pair it with some fava beans and The Endless Blockade’s Primitive for a delectable repast.
Aside from the usual Man is the Bastard and Capitalist Casualties influences, the duo (with roots in Artimus Pyle, Vae Victus, Gehenna and GOB) pillage from both their past and some of the best noise that noise rock has to offer, giving their slower songs a boost of groove. Helmet heft and stomp rubs against abrasive, ringing guitar tones a la Neurosis cradled by a touch of mid-tempo Anodyne rage. The title tune in particular is hummably lumbering mass that ably displays the best of Iron Lung’s influences and sheer songwriting craft.
And Sexless//No Sex is the band’s best sounding 20 minutes of music to date without sacrificing sonic bulk for clarity.
But the real coup for Iron Lung, though, was snagging the impossibly detailed black and white artwork by Nick Blinko, Rudimentary Peni’s gifted, if a tad unstable, mastermind. Blinko’s stark linework has always separated his band’s image from the hordes of black and white photos of war and destruction Xeroxed into grimy oblivion that have plagued anybody who played with or was influenced by Discharge.
All told, this is one vow of celibacy I can get behind
Posted by Andrew Childers at 6:23 PM