The Life of Bryan: Grind’s Premiere Drummer Just Tries to Keep the Beat 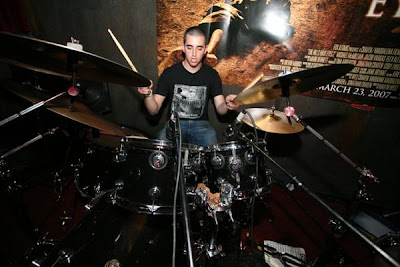 Novelist David Foster Wallace hit upon an ingenious idea in his hefty tome Infinite Jest: at some point in the near future corporations will be able to buy the naming rights to individual years. So instead of 2009, this would be the Year of the Perdue Wonder Chicken. With that inspiration, I say we all pool our scratch and retroactively buy up 2008 at a reduced price and rename it the Year of Bryan Fajardo’s Unfuckwithable Blastbeat.
If there were ever a candidate for grindcore’s equivalent of the Hart Memorial Trophy, it would be Fajardo for his wrist-shattering efforts to out-Witte drumming ubermensch Dave Witte. The year 2008 alone saw the guy backstop Discordance Axis-Jr. Noisear, bolster Phobia’s live presence, help Kill the Client notch a new personal best and still found time to collaborate with Jon Chang on GridLink (which I heard put out a decent enough album). In addition to a day job like you and me.
Shit, my arms are tired just typing that and I guarantee you I wasn’t moving at 200 bpm while Jon Chang shrieked at me to go even faster.
“It gets pretty crazy when I have two tours booked and they coincide with each other,” Fajardo said. “And flying all over the country is just part of the game.”
In a slight twist on Edison’s formula for success, Fajardo has risen to the top of the grind heap through 99 percent perspiration and 1 percent location. Seems like that guy is always in the right place at the right time when top flight bands come calling.
Case in point: being invited to perform a Discordance Axis cover with Noisear for the Our Last Day compilation (the leftovers from which ended up on Pyroclastic Annhialation) opened the door for Fajardo to slide into GridLink during one of that band’s well publicized personnel reallocations.
“Well, they were having problems finding a drummer that was able to pull off the speed they needed with out adding too much,” Fajardo said. “I pretty much kept to Chang’s ideas but was able to add my own styles.”
And it’s not just those of us outside looking in flipping over Amber Gray’s psychotic mix of Discordance Axis and neon flashing, pachinko hall, cold coffee in an aluminum soda can Japanese goodness. Somebody else got a tad fanboy over Matsubara’s post-Mortalized shred as well.
“I am pretty happy with the way it all turned out,” Fajardo said. “The music is just as intense as we planned. I must say the guitar playing on the record is what makes it one of my own favorite grind releases. Matsubara is amazing!”
And remember what we said earlier, if you’re gonna score prime grind real estate, it’s all location, location, location.
“It was pretty easy hooking up with the KTC dudes,” he said. “I actually live in the same city as these guys so we have more time to focus on writing and keeping the bands sound up to par. As far as input on writing, ee all put in equal creative freedom. I knew I wanted this record to be more intense and tighter than the previous efforts. It also helped that I got back from a tour with Phobia a day before we started recording Cleptocracy so I was pretty warmed up.”
That easy transition went both directions.
“He loves playing music. That's all he wants to do,” Kill the Client mouthpiece Champ Morgan said.
For all the intensity you hear on vinyl, Morgan said Fajardo remains zen when it’s time to hit the studio or pile into a van for a show, which probably helps him juggle the kind of course load that would crush your average college freshman. 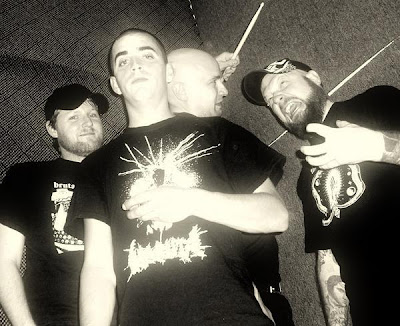 “Brian, or ‘Fajita' as I like to call him, brings real precession and power to KTC.,” Morgan said. “He's very, very technical and knows what he wants to hear in the songs. He really has a great feel for grind music and in that he strengthens the backbone of what we are as a band. His speed is sickening. That's all I can say. I watch him sometimes just wondering how his hands and feet move that fast.”
So to sum up: Fajardo anchored the best grind release of 2008, backstopped an unappreciated legend of American metal on stage and propelled Texas’ finest to new heights of rectal ripping goodness. Oh and Noisear plan to grace us with new issue by the close of 2009 as well as the second installment of the finest compilation series since the crucial Cry Now, Cry Later albums.
“[Noisear] are writing new material for a full length that will be released on Six Weeks hopefully by the end of the year. Also recording for the next This Comp Kills Fascists Vol. Two on Relapse,” Fajardo said.
And somehow this drummer doesn’t see himself as the current king of the blastbeat heap.
“I don't really see myself as a top contender in the grind world but I appreciate that people are noticing what I do,” Fajardo said.
Modesty is all well and good, but at this rate, we may have to save up to rename 2009 after the guy as well.
Posted by Andrew Childers at 7:28 AM

Very nice post, now I regret not seeing Gridlink live even more when they came by here...

Also, you sure you're not going to MDF this year? At least try to make it for the Saturday show.

That Fajardo is a good dude. Low key personality, quiet, and and amazing drummer. Saw Gridlink two nights in a row and he was exceptional throughout.

Oh, nice! Fajardo seems quite shy and all hah.

And speaking of GridLink, I can't miss the upcoming Japan tour. I just can't. Also, think of all the possible support bands over there! I mean, ASRA's awesome stuff, but man...!

Super nice guy. I met him in NY on the phobia/impaled tour. His best drumming is with Kill The Client though.

Hello !.
might , perhaps very interested to know how one can collect a huge starting capital .
There is no need to invest much at first. You may start earning with as small sum of money as 20-100 dollars.

AimTrust is what you need
The firm incorporates an offshore structure with advanced asset management technologies in production and delivery of pipes for oil and gas.

Its head office is in Panama with offices around the world.
Do you want to become an affluent person?
That`s your choice That`s what you wish in the long run!

I`m happy and lucky, I started to take up real money with the help of this company,
and I invite you to do the same. It`s all about how to choose a correct companion utilizes your money in a right way - that`s AimTrust!.
I take now up to 2G every day, and what I started with was a funny sum of 500 bucks!
It`s easy to start , just click this link http://idodumutud.freewebportal.com/tekywid.html
and lucky you`re! Let`s take this option together to get rid of nastiness of the life

Good day !.
might , probably very interested to know how one can collect a huge starting capital .
There is no initial capital needed You may commense to receive yields with as small sum of money as 20-100 dollars.

AimTrust is what you thought of all the time
The company incorporates an offshore structure with advanced asset management technologies in production and delivery of pipes for oil and gas.

It is based in Panama with offices everywhere: In USA, Canada, Cyprus.
Do you want to become really rich in short time?
That`s your choice That`s what you really need!

I feel good, I started to get income with the help of this company,
and I invite you to do the same. If it gets down to choose a proper partner utilizes your funds in a right way - that`s the AimTrust!.
I make 2G daily, and my first deposit was 1 grand only!
It`s easy to join , just click this link http://byqicoze.freewebportal.com/ogawiv.html
and lucky you`re! Let`s take this option together to feel the smell of real money

Hi!
You may probably be very curious to know how one can make real money on investments.
There is no initial capital needed.
You may begin to get income with a sum that usually goes
on daily food, that's 20-100 dollars.
I have been participating in one company's work for several years,
and I'll be glad to share my secrets at my blog.

Please visit my pages and send me private message to get the info.