Punk as Fuck: The Dicks

Shhhhh. Nobody tell Zmaj because I don’t want him to take this as me capitulating in our argument over whether grindcore is more punk than metal. As you may have heard before, I came to this whole grind thing by way of punk because, let’s face it, grind is the punk of metal. I started buying fewer and fewer punk records as grind became my idée fixe and many of those albums I did have got sold off during the peripatetic phases of my young adult life. However, punk still holds fond memories for me as my first real musical love (one day I’ll tell the story of how I went from Foreigner and Dire Straits to grindcore), fondly remembered like a first kiss. So periodically, I’m going to pull out beloved punk gems to share and reminisce over. 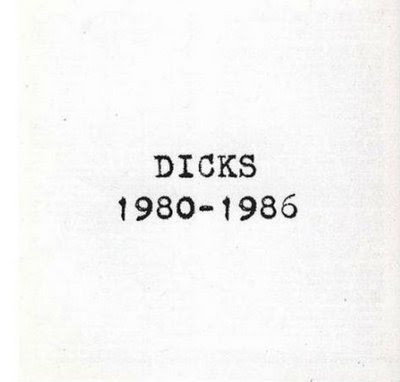 The Dicks
1980-1986
Alternative Tentacles
1997
The Dicks brought the pride of Pansy Division with the confrontational bitch slap of Black Flag, but wrapped through a narrative aesthetic that was more Hedwig than John Waters, courtesy of larger than life frontman Gary Floyd and his blues seared baritone that sounds like gnawed beer cans and gargled cigarette butts belting out street level observations about the most marginalized aspects of society against slashing punk rock battery. Floyd possessed a voice so soulful he could render a hoary punk cliché like “we don’t want no fucking war” refreshing and affecting for its world weary honesty and the genuine sense of despair driving it. He also proved himself to be one of the great punk rock raconteurs when he gay heckled a beer-flinging audience member mid-song during a live version of glory hole anthem “Saturday Night at the Bookstore” without breaking his stride.
While “Dicks Hate the Police” is probably their most famous song – deservedly so and largely due to being covered by Mudhoney, my favorite remains “Shit on Me,” a curb-side queen tale of gay hustlers so awesome Mike Watt of the Minutemen used it as his answering machine tape in the 1980s. Instead of a woe is me jeremiad on the misery of a life spent hooking, the song is a defiant brush back, sex wielded as a weapon in an era when Saint Ronnie of Reagan couldn’t even bring himself to utter “AIDS” for fear of offending the religious whackaloons who propelled him into office.

When you talk about the Dicks you also have to acknowledge the divide between the Austin and San Francisco lineups, with the former being more visceral and street scummed while the latter grew more refined and self-consciously arty, building on Floyd’s inherent abilities as a story teller and gutter-level journalist and no song captured that searing insight better than the thoroughly despondent “Sidewalk Begging,” a song that should kick the homeless romanticism out of a legion of spoiled suburban crusty runaways.

The Dicks – “Sidewalk Begging”
Posted by Andrew Childers at 7:48 PM

1) fuck yes! kill from the heart, hope you get drafted, dicks hate police, no nazi friends... all classics!

2) to hell with "homeless romanticism"! i used to think like that myself. all it took was a few years of working at the downtown branch of the public library to clear my mind of that bullshit.

there's a few clunkers late in the austin lineup, but god i love the dicks. i've been killing this album lately and had to share the love.

CMON BABY TAKE A SHIT ON ME!

You see, I hate that argument, so I side with Nashgul and call it Metal Punk. Or Blast Beat Punk when I want to see people give me the "hurr" look.

too dirty to be metal, to adept to be punk is how i see it.

haha didn't mean to turn this into a whole thing, here. just a small joke my and the z-man's expense.

but as linda richmann used to say, discuss amongst yourselves.

It's obviously more punk, though.

Zmaj just wrote the lyrics for a new Sakatat song.

Thank you :-) look at this emo boy hair on this blog:
http://www.emo--boys.info

Hey. I work for Alternative Tentacles. We're stoked that you like our bands, but the bands authorize us to distribute their music and are paid by us for it. It would be great if you could take down the download link and replace it with a link to our website so the band's fans can get it for themselves. If you would like a promotional song to put on this or future posts about Alternative Tentacle bands, please feel free to email comm@alternativetentacles.com and we'll hook you up!