Blast(beat) From the Past: Word Salad 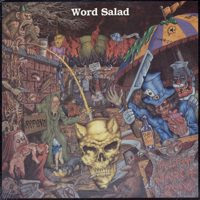 Word Salad
Deathmarch 2000
Prank
1999
Word Salad didn't have me at hello (because Tom Cruise should just die in a fucking fire already), but the dearly departed fastcore/grindcore quartet knew how to unlock the recesses of my heart with the opening guitar squall of "Hacking Flesh at Will" chased by the descending His Hero is Gone melodi-crust riff of "Stomach Wounds Bleeding Again."
More this word salad than that word salad, Word Salad the band whipped up a piquant southwestern mole of crust gracing the Prank roster from the '90s. Like onetime labelmates HHIG or Damad, Word Salad could throttled back from grindcore to sludge, often in the span of a single 90 second tune ("Living Cirkill") but were most comfortable crusing in fourth or fifth gear. Songs are crusty, grimy tales of getting blitzed on gutter booze ("At War with Alcohol"), arson ("Set Your Family on Fire") and incipient dick rot ("Sex=Death") that could only be cultivated, fungus like, in the darkest squat of the soul.
Though they never seemed to garner the same widespread accolades as some of their crusty contemporaries, Word Salad's sole long player is an overlooked, fetid little gem of misery and disease that keeps on reeking a decade later.
Posted by Andrew Childers at 6:54 PM

Haha, dude I was about to upload this on my blog ever since I "stumbled" on a copy of it last week. I've been looking for this album for awhile.

I actually found a cd version in the storage room of the radio station at my campus! I also found a copy of Artimus Pyle's "The Civil Dead" and Melt-Banana's "Cell Scape". Some more albums that I'll be borrowing/keeping from the station, haha.

Good review, I really dug how this band's sound "jumped" from a grind/thrash sound to something sludgy and doomy.

Gotta agree, a bafflingly overlooked band. I've the Death March 2000 12" and their "Specimen" 7" (fucking awesome packaging, I figure I'll post it on Cephscope soon, but I'm a lazy scanner).

finally i scooped you guys! Z especially has me checking my computer for bugs. it's uncanny how you seem to anticipate my posts and steal my thunder.

Thought you would enjoy the review written for this album by some DJ at the station years ago...

Hahaha, Almost wants me to stop being lazy and review albums for the station, if only the labels would reply back and send samples...fuckers.