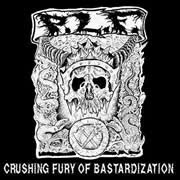 P.L.F.
Crushing Fury of Bastardization
Power It Up
Pretty Little Flower.
Yep, I checked. That’s actually what P.L.F. stands for. But dispel any fears of some lame ass hippy shit or obnoxiously unfunny joke grind because these Texans have spent the last decade honing their concussive, abrasive, abusive grind chops to a rusty scalpel edge.
So moniker issues aside, somebody tell me how I’ve previously overlooked this intriguing addition to the growing Gulf Coast Grindcore family, which already boasts scene elite Kill the Client and the late, great Insect Warfare. In fact, the hook here is the presence of former Insect Warfare drummer Frank Faerman, who blasted the beats during the Endless Execution Thru Violent Restitution incarnation of that band.
And while P.L.F.’s second full length, released way back in September and collecting a handful of splits and live tracks for bonus goodness, slots neatly next to the I.W. catalogue, guitarist Dave (no last name necessary) is not a Beau Beasley clone. Instead his grind is shaken and not stirred with a delicious undercurrent of double picking sharkbite that would leave Gary Holt grinning like a Cheshire cat. That speedy sense of groove undergirds the duo/occasional trio’s gurgle-growling and blastbeatdowns, elevating tunes like “Ironic Curse of Possession” (a prayerful wish the rapture comes soon – and violently) from the strata of just another grind work out.
Where their fellow GCXGC types tend to be dour mopes pontificating about the world’s ills and harshing your buzz, P.L.F. mix the same diatribes with some much needed levity uncommon to the hurricane ravaged region. “Point of Impact” even makes room for a pre-Seinfeld/racist rant sample of Michael Richards from the Weird Al vanity vehicle U.H.F.
Throw in a handful of live tracks, a couple of covers (Denak, Doom) and a riff admittedly lifted from Unseen Terror all played with crusty abandon and a refreshing lack of production pretention and you may just fill that Insect Warfare shaped hole in your heart.
Posted by Andrew Childers at 7:53 PM

This is some good shit for sure. Definitely what I need to fill up the Insect Warfare shaped hole in my heart. =P