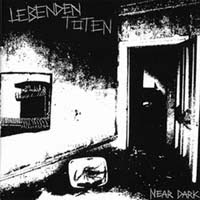 Lebenden Toten
Near Dark
Feral Ward
For a name I’ve always heard connected with the Portland crust punk scene, this is certainly not what I would have expected. With visions of Tragedy dancing in my head (Feral Ward is Yannick from His Hero is Gone’s label, after all) and band photos that look straight out of central casting for a Rancid video, I was at first confuzzled then pleasantly surprised when Lebenden Toten stripped away my stereo speakers one rust scraped layer at a time with a Brill-O pad of abrasive noise.
The spawn of a hitherto clandestine love connection between Merzbow’s Masami Akita and Melt-Banana’s Yasuko Onuki, Lebenden Toten (“living dead” for all you Anglophones) will occasionally give you a splinter of something vaguely recognizable as a song amid the electronic squall and canary in a coal mine vocals. Snippets of drum patterns or a fragmented guitar line breach like whales through the harsh static and tortured FX boxes. From off in the distance you’ll also occasionally grasp a chirped vocal line like a song bird alighting at the premiere of Cthulhu’s long awaited power saw concerto.
To even attempt to describe the band’s quicksand layers of punk and noise in the sense of conventional songwriting would be futile and, unfortunately, like their forerunners in HHIG, they seem to be averse to leaving any sort of internet presence where I can direct you to try for yourself. But those with open minds and a broad definition of hardcore will likely find a lot to enjoy here if they give it a chance.
Posted by Andrew Childers at 6:56 PM

Aside from the fact that Yannick from Tragedy released the CD version of some of their releases, Lebenden Toten has zero connection to His Hero is Gone and Tragedy.