G&P review: Birdflesh (How Swede it is Again, Part 1)

As much as I love my grind, I am not gonna even pretend I can hang with the Chephalochromoscope crew’s encyclopedic knowledge of Japanese goodness. Shit, go check their recent and unfuckwithable anthology of obscure Unholy Grave releases. Nope, I can’t keep up with all that’s happening in ol’ Nippon. However, Swedish grind and punk always puts the tingle in my lingonberries. So for the next few weeks I’m going to once again wade through my stack of upstarts and new releases from the country that inexplicably managed to give us both ABBA and Mats Sundin. 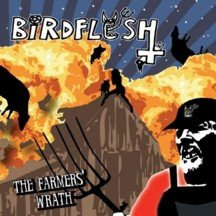 Birdflesh
The Farmers’ Wrath
Obscene
With each new Birdflesh album as the songs get stranger and the themes skew more bizarre, I’m convinced this smirking Swedish trio has the makings of a truly demented children’s show in them. Like Captain Kangaroo re-envisioned by David Lynch.
The repetitive sing along goodness that is “External Wounds of Vagina Power,” “Funny Ice-Dwarf” and the Metallica-tweaking “Some Kind of Mongo” will have the potty mouthed toddler in your life blissfully belting them out at the top of their lungs at the most inappropriate of times – probably a grandmother’s funeral. Hell, the title track’s bouncy horns easily could be the theme for some anodyne children’s show brimming with cheap morality plays about cooperation and sharing.
Birdflesh are one of the smartest and wittiest practitioners of feel good grindcore (as counterintuitive as that may be) and being ear-raped never felt as good as on The Farmers’ Wrath, which further spelunks the recesses of the Swedish kill crew’s damp, festering id.
Mere song titles haven’t made me smile this much since Population Reduction, and fuck it all if Birdflesh can’t deliver musically as well. Whatever imp of the perverse is riding shotgun on their reptilian brains struck comedic imagery gold on “Wheelchair Impaler,” “Leprosy on Jeopardy” and “AC/Deicide.”
Be cautioned though, like fellow joke metallers Crom the ratio of actual songs to absurdist noise is sliding in the wrong direction. Also, your appreciation of their rather one note shtick will be directly proportional to your appreciation for cretanic humor.
As for me, I believe the children are the future. Teach them well and watch the perversity grow.
Posted by Andrew Childers at 6:54 PM

Labels: birdflesh, grindcore, how swede it is, obscene, reviews, the farmers wrath

Thanks!
Carnage in the fields of rice.
You can hang with us :)

"Man is sometimes extraordinarily, passionately, in love with grind..."

simply offering my scant praise where it's sorely due, gentlemen.