Blast(beat) from the Past: From the Ashes (How Swede it is, Part 3) 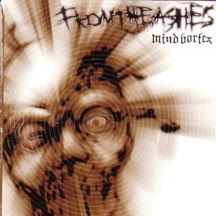 From the Ashes
Mind Vortex
Acoustic Trauma
2004
Grindcore’s Ritalin-ravaged songwriting tenets are not prone to embracing concept albums, something generally reserved to jazz-influenced wankers who feel the urge to jerk off their instruments for an hour or so while pontificating on whatever religion/culture/conspiracy theory they happened to read about that week. Despite that baggage, From the Ashes bravely steeped Mind Vortex in a conceptual broth that ties together lyrics and art to probe the inner recesses of the 1300 grams of meat we call our minds.
The Latin phrase “Terribilis est locus iste” is prominently featured throughout the gold toned art (which is also a welcome change from the traditional blacks, whites and reads you too often find gracing album covers). True to the title Mind Vortex, the album art is full of anatomical sketches of the skull and brain, inverting a lame Christian sentiment about the glories of heaven into a reverence for the awesomeness of human evolution, a far more worthy subject for a concept album, if you ask me.
Unfortunately, the music wasn’t as ambitious as the concept.
Before being swallowed by history a scant six years after forming, From the Ashes demonstrated an competent dexterity with traditional grind, playing a combination of most recent Phobia with upper register Jon Chang screams. While the music is a tad pedestrian, From the Ashes give the tradition of short songs played at wrist shattering speeds another solid punt down the road. Guitarist/vocalist Stefan seems content to ride his shrieking throughout the whole album, but the band brings in Septic Breed’s Timo Kumupumaki for a lower register cameo on “Machines,” providing some needed dynamics.
I don’t know what embers from which From the Ashes arose, but the Swedes never made it too far. Formed in 2002, they released Mind Vortex two years later but shelved the band in 2008. Even their label, Acoustic Trauma, has all but vanished down the memory hole, leaving almost no trace of the short lived grind unit.
The music never ventured far from terra cognita, but From the Ashes did manage to sound the depths of the psyche and pose the occasional dome scratcher question between the obligatory blasts and blustering, injecting some much needed intelligence in grind.
Posted by Andrew Childers at 7:49 PM

Labels: acoustic trauma, from the ashes, grindcore, how swede it is, mind vortex