Blast(beat) from the Past: Slight Slappers 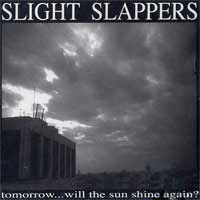 Slight Slappers
Tomorrow…Will the Sun Shine Again?
H:G Fact
2005
The line “Tomorrow, will the sun shine again?” appears in Ryuhei Kitamura’s 2002 execution gone wrong flick Alive (itself based on a manga by Tsutomu Takahashi). I don’t know if there’s any direct connection between that and this platter of exquisite punk noise from Japan’s finest purveyors of power violence, but I just thought I’d throw it out there.
Everything about Tomorrow is raw, with a blown out production that highlights every pick squeal and cracked cymbal crash, but Slight Slappers manage to fight through that skateboard injury sound to craft genuinely hummable tunes. If the scabs were scraped off of “The Ocean, August and Blue Memories” and the song was re-recorded with cleaner guitars, it easily could be the hook for one of those annoying Carnival cruise commercials and just maybe they could stop abusing Iggy Pop’s junky odes.
For an album that’s less than a dozen minutes long, Tomorrow is laced with those kinds of touches. The headlong punk of “Sweet Box” drones off into a swirling melodic maelstrom that in turn segues into the bouncing faux-pop opening of “Flystar.” But the pinnacle of the Slight Slappers’ distorted melodi-punk approach is the close out title track, another commercial jingle candidate as performed by a power saw quintet with gently draped guitar lines of the sort Ben Carr bangs out with regularity.
Man is the Bastard famously coined the term West Coast Power Violence, but if they’d taken a moment to look to their right, there was another potent power violence storm brewing just across the ocean.
Posted by Andrew Childers at 8:29 AM