How Swede it is (The Punk Years): Anti Cimex Part 2 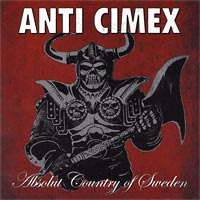 Anti Cimex
Absolut Country of Sweden
Regain
Discharge may have declared they were “Born to Die in the Gutter,” but that was less a cri de coeur than yet another set piece to indict a British society still hung up on Victorian notions of class and propriety. After a short hiatus, 1990 saw Anti Cimex step back into the limelight and out from under Discharge’s lengthy shadow on comeback album Absolut Country of Sweden, less a political manifesto than a realization that the apocalypse will come at an individual scale. Absolut Country of Sweden found Anti Cimex abandoning even-then stale diatribes against the faceless state in favor of something far more honest and personal.
It’s hard not to be struck by Freke’s wailing that “I won’t sleep alone tonight” on “1990,” which comes lead weighted with a decade’s despair, isolation and desperation. While punk’s inherent fuck you attitude has made it an ideal vehicle for antisocial angst for three decades now, it far too often fails to connect on such an honest emotional level.
That emotional honesty would never have been so effective had Anti Cimex also not broadened their songwriting. The spiraling urgency of “Wheel of Life” is majestic and the intricate intro to “Under the Sun” is remarkably delicate when offset by the overall hardcore brutality. “Rose” reaches deep into punk’s roots to exhume fro-ed out MC5 psychedelia.
Absolut Country of Sweden is an absolut masterpiece from the forefathers of Swedish punk, the emotional and songwriting peak of a career that is directly responsible for an entire country’s ongoing love affair with up tempo hardcore.
Posted by Andrew Childers at 6:12 PM