How Swede it is (The Punk Years): Anti Cimex Part 1

First up, you have no idea how excited this makes me. Regain Records, a label I tend to associate more with Euro death and old In Flames records than gutter punk glory, has snapped up three out of print Swedish crust classics by founding punks Anti Cimex and put them back in circulation. I have been peeing my pants with excitement about this since February when everything was originally slated to hit stores only to watch with dismay as the release dates got shoved further back and two previous orders were cancelled. Even when the release date in June came and went a couple of these albums were still trapped in back order limbo (the Wolfpack reissues that I wanted to include with this have been shoved back into August and I’m not holding my breath Regain will meet that date either). But oh, were the Anti Cimex albums ever worth every minute of kid-before-Christmas anxiety.
Swedish punk begins here. 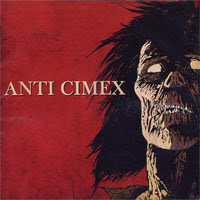 Anti Cimex
Anti Cimex
Regain
This is ground zero for all of Swedish hardcore.
Anti Cimex, named for a pest control company, is the kind of band for which terms like crucial were coined. Short of the Ramones, Black Sabbath and Napalm Death, I’m at a loss to think of a band that has had a more profound impact on a musical scene. For those of us who can’t claim to own an original copy of the seminal Raped Ass EP (my excuse is I was four and living in the frozen hellscape of North Dakota at the time, which may explain my Swedish fetish, come to think of it), Regain has smartly reissued this collection of early works by the masters, the Rosetta stone of Scandi-crust.
This eponymous collection is Anti Cimex at the peak of their Discharge influence, Ds get beaten and the guitars can barely be contained by the cheap studio job. The early songs are a sonic safari of stampeding wildebeest drums being harried by the kind of rabid wasp guitars Unseen Terror would perfect. And all of that is just a pedestal to display Tomas “Freke” Jonsson’s vodka scarred crocodilian roar.
The songs all touch on the inspirational Brits’ wellworn themes on “Cries of Pain,” “Warmachine” and “Victims of a Bombraid” (or as Freke’s accent puts it, “weektims of a bombraid”). But even when Anti Cimex were beholden to Discharge (and to a lesser extent Amebix’s biker bar ambience), songs like “Smell of Silence,” with its Wayne Kramer freakout guitars, presaged the band’s incredible growth. The guitar trills and cymbal runs of the slow motion collapse of “Painkiller” already showed the kind of songwriting chops the band sprout later.
At time furious, hilarious and unexpectedly deft musically, Anti Cimex and contemporaries like Totalitar built on Discharge’s foundation, assembling the pieces that would become the Swedish punk of Disfear, Acursed, Avskum and a host of others.
Posted by Andrew Childers at 7:45 PM

I recently came accross your blog and have been reading along. I thought I would leave my first comment. I dont know what to say except that I have enjoyed reading. Nice blog. I will keep visiting this blog very often.