Blast(beat) from the Past: Apartment 213 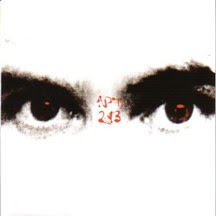 Apartment 213
Discography
625 Thrashcore
2005
Apartment 213’s “Kill for Christ” is the single most perfect power violence song ever recorded east of the Mississippi. The implacable mid-tempo stomp is like being stalked by Jason Voorhees; the foreboding bass never alters its tempo but you know somehow it’s gaining on you no matter how fast you run. Then the machete-like lead riff comes slicing through your body from a direction you never expected. The sludge menace and audible violence of that song alone perfectly embody everything power violence strove for.
And that’s just the second song on these Cleveland bruisers’ 40 track discography, collecting the early works of one of only two bands to get Eric Wood’s rare imprimatur as genuine power violence (the other being The Endless Blockade). Hell, the entire affair kicks off with one of the most beautifully unhinged phone messages ever captured by recording technology.
Like Macabre before them, Apartment 213 had a fixation with serial killers, especially mid-90s Midwestern freak Jeffrey Dahmer (duh) through the métier of unhinged punk and the kind of gutter psychosis that would have Henry Rollins curled up under his bed with a teddy bear. The awesomely named Steve Makita sounds like a power tool, some steel cased, heavy duty model with a ground plug and frayed wiring.
Being a discography, the sound quality varies wildly, but the rough edges only lend more menace to gut punches like “Dissection” or “Two by Four Crucifixion.” he band have also recorded one full length and a less than satisfying split with Agoraphobic Nosebleed, but the discography shows Apartment 213 at their rawest, a young band raging against the stultifying boredom of the Midwest. It’s enough to make someone go on a killing spree.
Posted by Andrew Childers at 6:42 PM