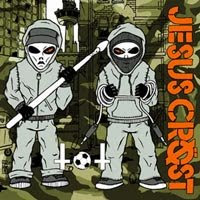 Jesus Crost
Tot
Bones Brigade
There’s no drum machine in Jesus Crost’s arsenal but the Dutch duo channel the mechanically-enhanced vibe of recent Agoraphobic Nosebleed or Enemy Soil on Tot. Even the artwork has a Prosthetic Cunt’s Eurotrash cousin vibe to it. But nope, no drum machine. Just a guy in a lucha libre mask who calls himself 10 beat blasts in time with a guitarist known only as 13.
While Jesus Crost, on balance, may not have honed their songwriting chops to the scalpel edge of the aforementioned, Tot boasts a raw, wood shop guitar tone and “Geheimfavorit” could have been lifted off of just about any era Enemy Soil 7-inches. There are other flashes that hint at the band’s gestational potential to grow into a respected player in the Euro grind realm as well. The bouncing opening of “Der Schnock” will get your wooden shoes tapping and “Milevsky” slo-mo wades through 30 seconds of the same quicksand murk that defined Nasum’s “The Final Sleep” before being tattooed by relentless blastbeats.
Things do go off the rails late in the album, though. The band squander whatever good will they’ve accumulated, unfortunately, as they close out their album anticlimactically with their live appearance at the 2008 Obscene Extreme Festival, 10 minutes of the worst live recordings you’ve ever heard. Seriously, the first couple of listens, I actually thought it was some sort of lofi electronics dickery.
But that’s easily ignored. While Jesus Crost may need to invest in a better live sound engineer, Tot shows the band already has a confident handle on its studio sound.
Posted by Andrew Childers at 8:25 PM

Review quality considered, I wouldn't worry about being scooped if I was you. :P

Now, here's a recommendation/review suggestion for a change: Rise Above (Japan) - I Love To Relax (2001).

a recommendation from you'll i'll take seriously. ... right after i wrap up my next project, which i shit you not, have been peeing my pants excited about since february.

Uh oh, okay. :D Pee well in those pants. And speaking of excitement, I am also very much excited and hellishly giggly 'cause I'm finally seeing grandpa Witte play this side of Europe in a couple of weeks (Municipal Waste + Ratos de Porão).

Hi !.
You may , probably curious to know how one can collect a huge starting capital .
There is no initial capital needed You may commense earning with as small sum of money as 20-100 dollars.

AimTrust is what you need
The firm represents an offshore structure with advanced asset management technologies in production and delivery of pipes for oil and gas.

It is based in Panama with affiliates everywhere: In USA, Canada, Cyprus.
Do you want to become a happy investor?
That`s your chance That`s what you wish in the long run!

I`m happy and lucky, I began to get income with the help of this company,
and I invite you to do the same. If it gets down to choose a correct partner who uses your funds in a right way - that`s the AimTrust!.
I take now up to 2G every day, and my first deposit was 1 grand only!
It`s easy to start , just click this link http://sapicewucu.1accesshost.com/nemymif.html
and lucky you`re! Let`s take our chance together to feel the smell of real money

Hi there!
I would like to burn a theme at here. There is such a nicey, called HYIP, or High Yield Investment Program. It reminds of ponzy-like structure, but in rare cases one may happen to meet a company that really pays up to 2% daily not on invested money, but from real profits.

For quite a long time, I make money with the help of these programs.
I'm with no money problems now, but there are heights that must be conquered . I make 2G daily, and my first investment was 500 dollars only.
Right now, I'm very close at catching at last a guaranteed variant to make a sharp rise . Turn to my web site to get additional info.

Good day, sun shines!
There have been times of hardship when I didn't know about opportunities of getting high yields on investments. I was a dump and downright pessimistic person.
I have never imagined that there weren't any need in large starting capital.
Nowadays, I'm happy and lucky , I started to get real income.
It's all about how to select a correct companion who utilizes your funds in a right way - that is incorporate it in real deals, parts and divides the profit with me.

This work of art is very good, in fact I have intention to travel to your country to see her live, I say it is a wonder to the eyes, jesus Crost is very good work, congratulations.

greetings to all.
I would first like to thank the writers of this blog by sharing information, a few years ago I read a book called Real Estate Investment costa rica in this book deal with questions like this one.

Thanks for sharing such an interesting post with us. You have made some valuable points which are very useful for all readers