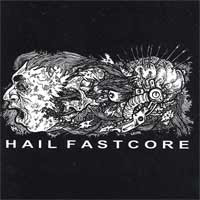 xBrainiax
Hail Fastcore
625 Thrash/To Live a Lie
Oh fastcore gets hailed on this hour-long, 99-track compilation from this fleet-footed Michigan quartet. As an added bonus, power violence gets a shout out, punk gets a what’s up, hardcore high-fives, crust occasionally wakes up from its mystery pills and gutter wine stupor to mumble a friendly hello and Star Wars gets sampled liberally. Which pretty much tells you everything you need to know right there.
xBrainiax play fast punk and regardless your preferred nomenclature, they do it pretty damn well for a band that recorded most of these songs themselves in their practice space. Hail Fastcore is all frenetic drumming, indistinguishable guitars, unhinged and ranting vocals and largely indistinguishable songs that would probably rule your local VFW basement hall on a bill with Threatener (fitting given 625’s involvement) and Asshole Parade.
xBrainiax will never be accused of being mucsical visionaries, but they ably acquit themselves of a whole host of punk clichés with panache and aplomb. “Jaded, Twisted and Evil” is your classic example of the slow build intro giving way to breathless blast finish, and blink and you’ll miss it “Trekkie Killer” is the band’s equivalent of “You Suffer” (which they also cover along with Y, No Comment and Infest tunage). The band does whip out one truly unexpected WTF? moment late in the collection with “Idiot,” a five minute bit of ponderous epicus doomicus hardcore-icus that could have been swiped from St. Vitus’ cutting room floor. Unlike their brooding, oh so serious compatriots, xBrainiax prefer to let their seething sarcasm do the heavy lifting excoriating their targets on songs like “Finishing Last in the Human Race,” Lenny Kravitz is His Answer” and sly Dead Kennedys reference of “Young Republicans Fuck Off.”
You’ve probably heard a hundred other bands that sound exactly like xBrainiax but sometimes it’s nice when an old friend like fastcore comes back around to say hi or hail or whatever.
Posted by Andrew Childers at 7:38 PM

the threatener conection is also fitting since lucas played in both bands.

didn't make the connection. thanks for pointing that out.