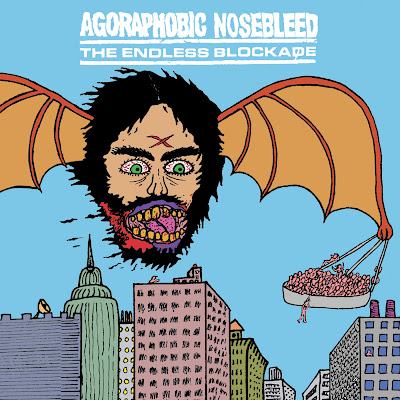 Agoraphobic Nosebleed/The Endless Blockade
Split
Relapse
Though I eventually came to enjoy it on its own terms, I had a bit of a Chinatown reaction to Agorapocalypse at first: I love it, I hate it, I love it, I hate it, I love it and I hate it. *sob*
I’m similarly conflicted about Agoraphobic Nosebleed’s side of this 7-inch split with Toronto power violence revivalists The Endless Blockade. Since their split with Apartment 213, Nosebleed have been drifting further and further from the microgrind mindfucks that they popularized at the start of the new millennium. I’m all for experimentalism, especially from someone as preternaturally talented as Scott Hull, it feels like Nosebleed has suffered and lost focus the more successful Pig Destroyer has become.
The 7-inch was the world’s introduction to new vocalist Katherine Katz and she dominates the first two songs, “Spielberg Summer Blockbuster Snuff” and “One Nation Under Z.O.G.,” both of which feature some classic ANb random assault rifle spray style machine grind, but buried between pseudo sludge meanderings that never seem to decide on a destination. Spoken word free association rant “Sand Worm/Improvised Explosive Dismemberment” easily could have been lifted from one of the interludes on Altered States of America and features some of J. Randall’s most beautifully psychotic ramblings since that album. “Cum shot in the eye of Allah/ American GI caught jerking off/ Inside a mosque/ His head separated from his body/ Like the church from the state” is pure genius and better and more focused than any of the cheap misogyny shock tactics on Agorapocalypse.
While Nosebleed’s half may be a mixed bag of caviar and rotted veggies, The Endless Blockade easily make this EP worth the $6 bucks. The Toronto noisemongers savagely beat and fuck (not necessarily in that order) everything their electronically augmented Godflesh jello wrestling Man is the Bastard at a Capitalist Casualties basement show. “93 93/93” stomps, chuffs, grinds and stops again in the space of about 90 seconds while “Hangman” ponderously surveys the landscape against a backdrop of electronic menace. As with Primitive’s “Perfection,” The Endless Blockade’s “Phantoms” out-Nosebleeds the masters with a dick-in-the-electrical-socket rant while every hair on your body spits arcs and sparks and where Jello Biafra got the honors on Primitive, The Endless Blockade rodeo Mick Harris into screeching out the vocals on the latest version of their ubiquitous, eponymous tune.
The Endless Blockade don’t stray far from the sound they perfected on Primitive, but their half of the split shows them steadily refining the elements, demonstrating why they are clearly the leaders of the power violence renaissance.
Posted by Andrew Childers at 2:08 PM