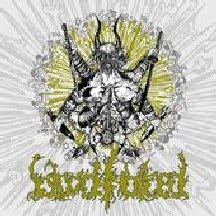 Gods Out of Monsters

The blood this Dutch grind quartet bleeds is 75 percent identical to the sanguinary core of My Minds Mine. Reveling in a misanthropic disappointment with humanity’s failings, Blood I Bleed delivers battery acid-splashed grind and rotgut punk front with heartworm infested Rottweiler for a frontman. A new name and a drummer transfusion were all Blood I Bleed needed to vault themselves into their nation’s elite, particularly on face punching second album Gods Out of Monsters.

Shantia not only wrings rusted crust from his guitar but his plays his amp as an accompanying instrument as well, festooning “Insensible We Are,” “Pent up Rage” and “God Fear” with spangled garland of deliberate feedback like a Satanic Christmas tree. It’s a skill he’s mastered since his days in My Minds Mine. “Insensible We Are,” in particular is a highlight, immaculately manipulated feedback and a serpentine bass slither reenact the Garden of Eden fable in 30 second grindcore form. Bert’s bass has a vintage ’80s clunk to it, particularly on the cracked knuckled closer “Theorising Utopia,” and Henk smacks the drums with a substantial thump on the song’s inevitable blastbeat coda.

Gods Out of Monsters also rips a retrofitted DeLoreon ride through punk and grind history. “Scene Pool is Closed” nods back to crossover punk and “Bumper Sticker Analysis” condenses and repurposes the ever-spiraling central riff from Napalm Death’s “When All is Said and Done,” knocking off some altitude in favor of amped up rage. The band also brutalizes a cover of Enemy Soil’s “Lost,” which is a tightly compacted, contracted spiral against the rangy, random violence of Blood I Bleed’s own catalogue.

At a tight 18 minutes, Gods of Out Monsters is a ferocious, atheistic beast that pairs nicely with Attack of the Mad Axeman. Misanthropy rarely sounded so awesome.

Posted by Andrew Childers at 6:28 PM

That settles it. I want this album.

this one is right in your wheelhouse. bet you'd totally dig it.