Blast(beat) from the Past: Lethargy 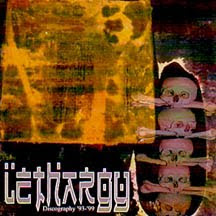 Lethargy
Discography ’93-’99
Watchmen/Spoth
2000
Not just horribly misnamed, but hyperactive death/grind monstrosity Lethargy also never seemed to have racked up the kudos it deserves on its own. Instead, the Rochester, N.Y., band is best known for everything that came after. Famously, it spawned future Mastadudes Bill Kelliher and Brann Dailor who went on to major label fame and fortune following a brief, apocalyptic pass through Today is the Day (In the Eyes of God era). Lethargy was also the springboard for guitar guerilla Eric Burke who has cycled through Kalibas (jumping to drums), Sulaco, Nuclear Assault and now filling Gurn’s Adidases in Brutal Truth.
All that post-millennial success was germinated in Lethargy, a rotating cast of characters that dumped death, grind and hardcore into a Cuisnart and punched liquefy, ending up with a sound like Human Remains getting roundly pimp slapped by Botch. Strained, gut-busting, turd-squatting hardcore vocals wrassle with death-inflected riffs that soundtrack Hunter Thompson’s drug binged rampage through a circus-themed casino in Fear and Loathing in Las Vegas all topped over by Dailor’s Ritalin-deprived drumming, which hammers and skitters across the spectrum, challenging everyone else to play catch up.

Lethargy – “Grieve into the Eyes That Bleed”

Just when you lock into a grove or latch on to a mindbending riff, it gets whipsnapped out from under you like a lame dinner theater magician’s routine gone horribly…. right? Quite honestly, if I’m not in the right headspace, this shit can be overwhelming, particularly given the two-disc, 2.5 hour reissue from several years back. However, this monster’s DNA has been filtrating through metal and hardcore for the past decade as an act of musical panspermia. You’ve heard a lot of this before, but if you were fortunate, you heard it here first and you probably haven’t heard it better.
Posted by Andrew Childers at 7:07 PM

Love this band! Lethargy inspired a ton of bands without those bands even knowing it. I completely agree that along with Human Remains, they are one of those bands that never did get the recognition they deserved. Easily one of the best and most original bands...ever.

Very underrated band, along with sulaco. They had a great technical style that was not a bunch noodling and wankery bull shit you here so much of today. I also never get tired of those drum fills...lovely.

am i the only one who starts thinking of circuses when i hear lethargy? i used to describe it to people as "calliope-core" but that just made them look at me funny.

I can see that easily, but i think bill kelliher referred to themselves as having a circus metal sound. you can still here some lethargy in early mastodon.

Mastodoners doing blastbeats? (Dare I say... Blastodon?) I'm so there.