Panic! At the Discography: Agathocles 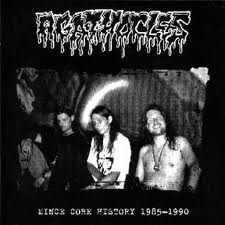 Selfmadegod
2001
The fact that I enjoy Agathcoles as much as I do – which is more than is probably healthy – comes despite – not because – of the fact that I own three of band’s four discography collections courtesy of Selfmadegod. When I said the discography is probably worst blight inflicted upon grindcore, these are exactly the albums I had in mind. 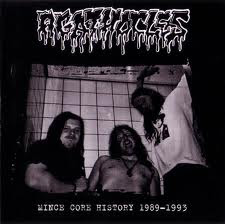 The Belgians are the king of the split, which is great because a little Agathocles can often go a really long way. So being hit upside the head with 40 or 50 poorly produced tracks from the band’s various splits and comp appearances is exhausting, wearying and aggravating. In their original format as one off 7-inches, these songs would pass without comment and quite a few would rule hard. But being bludgeoned relentlessly by – let’s be honest here – interminably identical songs of often questionable quality does not do the band proud.
Packaging-wise, the normally awesome Selfmadegod simply collects the material onto a single disc. There’s no liner notes from band mainstay Jan Frederickx illuminating the band’s various travails, revolving membership or at least highlighting bits and pieces of the songs and spoken word bits. Instead each album treats us to the same career discography that was probably woefully out of date by the time it was sent to the printer. For a band whose back catalog is as deep and varied as Agathocles', context is not a luxury for these kinds of collections; it's a necessity. 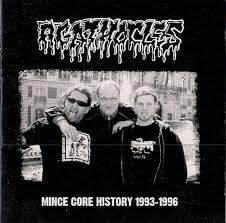 This is exactly what bothers me about a lot of discographies. Collecting 75 minutes of material (in triplicate) is enough to test the most ardent grind fan’s patience, so I expect discographies, especially if I’m shelling out for a physical copy, to go the extra step and offer me something that places the music in some sort of perspective. Discographies should be more than a collection of disparate music; they should illuminate either the band or their moment in history. To simply shovel songs onto an album just doesn’t cut it. Discographies done right can often serve as an excellent gateway into a band that maybe you haven’t explored before. But if you are new to Agathocles and interested in the legendary Belgians, I can’t imagine a worse introduction. Go grab pretty much any split or full length at random. These are for the hardcore record collector nerds only.
Posted by Andrew Childers at 1:53 PM

There are a few discogs I dig (Human Remains, the Sayyadina comp, the DxAx early stuff comp) but I mostly avoid them.

Basically, with few exceptions, Grind Finale is the only one to really, really get it right.

I'm so obsessed with context that when I bought Grind Finale and put it in iTunes, I split the thing up into their original releases (as best I could) and even scoured the interwebs for artwork. The process was enough to drive me mad. I'm not sure I'm willing to go through that with Agathocles.

im the opposite - just give me the music. smg is a great label by the way.

i love smg, but i just thought these albums as a package fell short.