Panic! at the Discography: Pig Destroyer 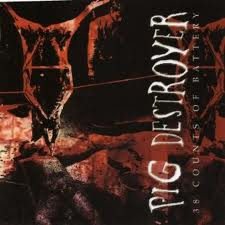 Pig Destroyer
38 Counts of Battery
Relapse
2000
Pig Destroyer achieved the nigh-unthinkable on early career compilation 38 Counts of Battery: it's a discography record that easily stands on its own as a contained album experience. That's largely because the first 18 of the eponymous 38 tracks come from Pig Destroyer's debut album Explosion in Ward 6. When you tack on an extra 20 songs corralled from the band's various splits and demos it still feels seamless and coherent. Even with all that, 38 Counts of Battery still comes in at a hair under 40 minutes (a tad long maybe), which keeps everything listenably concise. Despite being culled from disparate sources, the production remains largely uniform. Pig Destroyer's trademark heavy and overblown sound feels seamless and coherent.
Scott Hull probably ranks as the single best grindcore songsmith active right now. Every song is anchored in a distinctive hook. Every riff serves a purpose to advance the theme. Pig Destroyer's choice covers of The Melvins, Carcass and Dark Angel are a nice summation of the various influences that have driven Pig Destroyer creatively (add in covers of The Dwarves, Stooges and Helmet from Painter of Dead Girls and everything the band has done suddenly snaps into perfect focus). So 38 Counts is a wonderful peak behind the Great and Powerful Oz's curtain, letting you see how he grew and experimented as a songwriter, leading up to the perfection that is Prowler in the Yard.
38 Counts also represents vocalist J.R. Hayes' larval stage before he'd explode from the cocoon as a venomous, carrion-yellow butterfly on Prowler as one of the most intelligent and evocative lyricists in grindcore. Songs like "Yellow Line Transfer" and "Unwitting Valentine" are early examples of his obsession with obsession, stalking, toxic relationships and aloof, casually violent women. Others, the warped pro-choice savagery of "Treblinka," show Hayes being far more political than maybe we've come to expect from him.
I always enjoy when compilations include explanatory liner notes to fill in a band's history or illuminate where they're coming from musically, and that's lacking here. However, 38 Counts of Battery is so astonishingly coherent despite being Frankensteined together that it's easy to forget it even is a compilation. Instead, it just serves as another great album in Pig Destroyer's legendary career.
Posted by Andrew Childers at 7:40 PM

Finally checked this out after your article. I had avoided it because a friend told me it wasn't too hot. He's a goober, this is ace!

There are some fleeting moments that really make me think of DxAx, way before anyone else had ever even tried to sound like that. Also, the low growls are rad.

you know where they're coming from, wasn't richmond the capital of murders at some point in time?

wait.... what..... that's unpossible. clearly your friend is a dolt. hopefully he has other redeeming qualities. i don't think pxdx has ever made a bad album, that natasha noise included.

He's a neato guy, just not quite as into grind as I am, I guess. It's been years since he said that, wonder what he thinks now...

He is the reason I finally got Bestial Machinery by ANb, though, so props there. And he got me Insect Warfare's full-length for my birthday the year it came out. Hard to beat that.

I came into grind through thrash and death metal, he came in after getting way into black metal, so I guess we see parts of it differently.

I converted his ass to Who's My Saviour? and Dephosphorous, for which he still thanks me, haha. For which I thank you.

You're the Grindin' King.