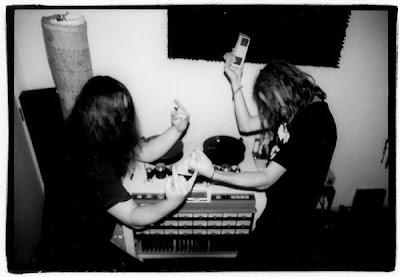 For all my cranky bitching, the friends with benefits relationship between grindcore and movies has been fairly productive. Whether it’s Graf Orlock’s artsy fartsy, copyfighting deconstruction of shoot em up trifles as modern mythology texts or garage goofs who just want to write a tune about their favorite flicks, movies —used properly – provide a shorthand for conveying themes, philosophical exploration and emotional depth. Or some movies are just really cool and deserve songs.
“Oh yeah, movies are a huge influence on this band,” Population Reduction drummer Justin “Dr. X” Green said. “Countless ideas for songs of ours have been directly or indirectly inspired by all the crap we like to watch. I wouldn't say they influence the music at all, but lyrically, we need all the help we can get and stealing ideas from other people's hard work just seems like the sporting thing to do! But yeah, sometimes it's a line in a movie, or a scene, or just the whole damn thing that we cannibalize. “
Population Reduction’s dynamic duo of Green and Ben (aka Peter Svoboda) marry a contemporary take on thrash with a movie collection that’s just as old as Ride the Lightning. If it’s low brow and high body count, chances are it might pop up in a Population Reduction tune some day.
“There are dozens upon dozens of things that we've filed away over time under the ‘This would make a fucking awesome sample’ label,” Ben said. “... We always write the music first, and lyrics second, but outside of that there's nothing resembling rhyme or reason. What I can say for sure is that we are both Corman fans, and the only movie that had more than one sample taken from it is Predator 2. I don't know what that says about us, but it's probably unflattering.”
“I love watching obscure low-budget 70s and 80s horror films and those are a gold mine for samples,” Green added. “I guess maybe our affinity for those kinds of movies comes from the fact that they, like our music, were a labor of love, have gone unnoticed or appreciated by most, and were characterized by a lack of monetary resources and a complete disregard of good taste.”
Their won perceived lack of good taste may be a reflection of the duo’s fractious relationship with art, as reflected by the songs “Art Fucking Sucks” and “Plague of the Artists.” Or something. Because they didn’t remember tackling art as relentlessly as they’ve opined on weed and zombies.
“Do we have more than one song about art?” Ben asked (possibly rhetorically, email is brutal to verbal irony). “Man, that memory loss shit is fucking real! Seriously though, art killed my father. Well, they hurt him real bad. Hurt his feelings, mostly.”
“Yeah, I don't recall having another anti-art song either,” Green said. “Actually, we're just jealous of those people who actually have artistic talent since Ben and I both still draw at about a 4th grade level: stick figures all the way. We know a lot of amazingly talented artists but that song isn't about them. It's about the people that have no artistic talent that think they are artists. A lot of the abstract art I've seen around the bay area could have been done by an 8-year old (or Ben and I) but is invariably posted next to a page long essay about how meaningful the painting actually is. It seems like as long as you can drop the correct art-world "buzz words", then you're in. So it's not an anti-art song, it's just anti-art-that-sucks.”
Population Reduction’s art (a term I’m sure will make them squirm) does not suck. In fact, it’s anti-suck. Unlike their contemporaries, Population Reduction are still riding the power of the riff while maintaining the blastbeaten intensity. And Ben also shares his riffs with thrash-violence outfit Voetsek, with whom he moonlights.
“It seems to be there's a difference between riffs that he writes for Voetsek and the ones for Population Reduction,” Green said. “To me, anything that sounds like it could have been a Megadeth riff goes to Voetsek whereas we keep all the Metallica riffs. Circa 1986 of course. I dunno, some riffs just sound like us. There's really only been one time where I heard Ben play a riff and was like ‘damn, I really wanted to play that!.’ Most of the time it's pretty clear which band a riff ‘belongs’ to.”
While Population Reduction’s relative profile has gotten a boost in the last 18 months from a (relatively) high profile split with death metal lifers Abscess and a well deserved slot on This Comp Kills Fascists Vol. 2, they’re in no danger of displacing Jay-Z from his bitches, hos and Cristal lifestyle just yet.
“Not so much, but we've really only been playing local shows recently,” Green said. “We're hoping to see a difference from the last time we toured when we hopefully hit the road in the spring or summer this year. The comp really was a great opportunity for us and hopefully exposed us to a lot of people (which is great since we can't actually expose ourselves to them; that would be illegal).”
Posted by Andrew Childers at 7:38 PM

Awesome article. It's nice to see a band that interviews well. You have a knack for pulling out quotes that work, without resorting to the cliche extracted quotes that make most short interviews formulaic.

great interview! hopefully these dudes do make it to the east coast and new york city specifically, we've got some thrashin to do.

great interview! hopefully these dudes do make it to the east coast and new york city specifically, we've got some thrashin to do.

Didn't expect them to be funny in such an articulate way. Pleasant surprises, indeed.

Nice interview! haven't checked these out so ill defo have a listen. Ive been waiting for this kind of crossover of interests. I'm a painter and pretty much always have some grind on the go in the studio. i think the intense speed equals out the intensely slow way in which i work

"Each Birth a New Disaster" and Abscess split both streaming in full here... http://downloads.tankcrimes.com/

good to see these guys getting some love, I'm their biggest fan.