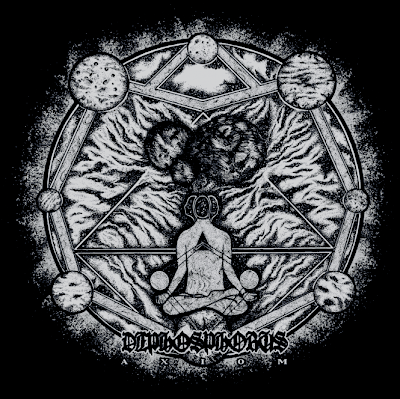 After much ceremony six maidens came in, each carrying a large trumpet that was wound round with a green, fiery, luminous material, like a wreath. The old gentleman took one of them, and after removing some of the lights at the head of the table and uncovering the faces, he set a trumpet in one of the mouths so that the upper and wider part came exactly to the roof-vent. My companions were staring only at the bodies, but I had other thoughts, for as soon as the foliage or wreath around the tube was kindled, I saw the hole above open and a bright stream of fire shoot through the tube and pass into the body. Then the hole was shut again and the trumpet removed, through which trick my companions were deceived into thinking that life had entered the image through the fire of the foliage. As soon as the soul was received, the body opened and closed its eyes, but scarcely moved. Again he placed another tube on its mouth, lit it, and the soul was let down through the tube; and this happened three times each. Then all the lights were extinguished and removed, the velvet tablecloth folded over the bodies, and the double-bed set up and prepared, on which the wrapped bodies were placed. They were taken out of the coverings, lead neatly side by side, and left to sleep a good while with the curtains drawn.

The Chemical Wedding of Christian Rosenkreutz
1616

Greek grindcore alchemists Dephosphorus brew black-glazed grindcore goodness that nicks a recipe from the eyes of newt and toe of frog burbling in Who’s My Saviour’s kettle. Like their mind-melded German compatriots, Dephosphorus will not accept limitations of anything as quaint as genre in their pursuit of something transcendent. But for all of that, there’s an unwavering core of crust and grind that knots it all together even when the band is astral projecting their collective unconscious to the furthest reaches of space and benighted dimensions.
Opener “Collimator” leaves me pondering whether to calculate the trajectory of my future Mars mission or to lurk down in the basement lighting candles and palpating invisible citrus. The song’s guitars glissade from space grind freak out to tolling church bell chiming in a way that’s organic and arresting. The eponymous “Dephosphorus” invokes the hellish piping Lovecraft always said presaged an unpleasant encounter with an Elder God while “Indulge Me in Silence” teases out the blackened Amebix core that lurked in Hellhammer’s shadowed, frosty heart. There are other brilliant little touches, like the way the scything opening of “On the Verge of an Occurrence” pans from left to right, flickering through your brain, that prove this young band is in command of some very advanced, and wonderfully subtle tricks.
I’ve been spinning Axiom on a regular basis for about two months, but the band is already planning their full length follow up, which will also feature a song by Unearthly Trance’s Ryan Lipynsky. I don’t know if ritualistic grindcore is a thing, but it needs to be. In a year that looks to boast a bumper crop of exception grind, this is 2011’s first totally unexpected surprise.

[Full disclosure: the band sent me a review copy.]
Posted by Andrew Childers at 6:47 PM

I'm into this! There's depth to this sound. I'll keep an eye out on the band's activities. Thanks for the post!

Actually "Axiom" isn't released officially yet. We are still searching for the label(s) who'll release it on vinyl and CD.

haha. i couldn't resist putting that in there specifically for you.

Very interesting; it's a shame it isn't released yet. If they (and you) hadn't offered definitions already, I don't know if I'd know where to place it on the extreme music spectrum, myself. I'll definitely think about copping this when it's properly released.

it will be featured prominently in the d mixtape next week, which is why i didn't bother posting a track to share.

If you like it, please consider ordering the gatefold MLP and/or our t-shirt.