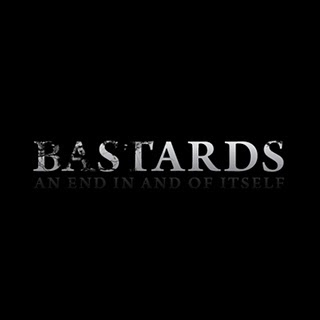 Bastards
An End in and of Itself
Self Released
I watched Robert Altman’s M*A*S*H about once a week in college just on general principle. It got to be damn near a religious experience. That and Casablanca were pretty much my go-to films when I had to write a paper in either history or film classes. I bring that up because listening to Columbus, Ohio’s Bastards calls to mind the scene in M*A*S*H where Robert Duvall as Frank Burns starts screaming at an unqualified private to bring him a CC of adrenaline in a cardiac needle when a patient codes out on him and then bitches out the private when he fucks up.
Adrenaline.
I just wish I could jab Bastards with it. They’ve got a decent name and a handful of equally decent sounding songs, but I’m just not getting that hormonal jolt that’s so vital to making grind work. I don’t wanna make An End in and of Itself sound worse than it is. The quicksilver hornet’s nest “You’re Not Entertaining” shows the band knows its way around a standout song and the wonderfully spidery “Punk Rock Bush Lite” sends arthropods skittering under your skin.
I just with the production was working with the band and not against it. While the guitars have a decent bumble bee buzz, the drums are just so thin and rickety that there’s no oomph from the backline. The bass is pretty much a nonfactor except in the obligatory overlong doom song “A Clock Without a Clocksman” which boasts some subtle four string work when it’s not busy riding a riff into the ground.
So it’s a bit of a mixed bag. Overall, there’s nothing fatal about An End in and of Itself, it’s just not going to displace your Discordance Axis albums any time soon. But don’t take my word for it; the band is giving their album away for download here. [Link has been corrected]
[Full disclosure: the band sent me a download.]
Posted by Andrew Childers at 8:31 AM

Labels: an end in and of itself, bastards, grindcore, reviews, united states

Don't count this as biggotry or general internet assholism, but itt's good to see that you are embracing the bandcamp Grindcore underground, it's a very up and coming sort of medium for our sort of racket. I haven't seen any blogs embrace it, with most blog's reviewing either well known releases or so super underground you can't get them.
Muchos Gracias!

The link is good, you just have to manually remove the www.blogger.com

manually remove no compute.
want click boom.
jk got it thanks.

I'm really excited to see this reviewed, I was curious if you would get to it.
I haven't heard this version but I listened to an unmixed copy a few months ago and hated the production. It suck that the drums didn't get fixed. Grind doesn't need pro-tools and triggers.
Still, I'll rep my bros from Columbus. Jon and Sean are both real rad dudes, so support their band!

sorry about that gamefaced. blogger throws its own url into links sometimes for reasons i don't understand. i'll get that fixed as soon as i can.

waiting for their revelation of our pending split.
actually it should drop in 2010.
Looking forward to it.