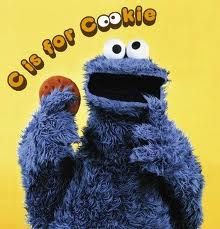 As children, Cookie Monster taught many of us that C is for Cookie. Turns out it’s also for crushing.
Without further ado, your letter C mixtape [Mediafire]:

Total to date: 75 bands
Posted by Andrew Childers at 6:55 PM

yeah i DLed chulo after i did the comp and i was too lazy to go back and add them. damn. can't believe i forgot crossed out and cattlepress.

cannibal corpse? they got two c's.

Oh man, what about Carcass Grinder? Their split with Insect Warfare is righteous. Cripple Bastards as well, if mainly for Variante alla Morte. Also, the South African grind band Cauterized (although their drum machine sound is painfully fake.)

God damn it, I misspoke again; you already included Cripple Bastards, my apologies.