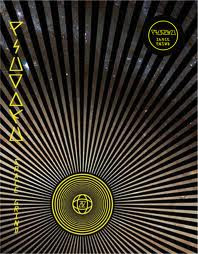 PSUDOKU
Space Grind
Revulsion
It’s an old truism that when a movie franchise or television series ran out of juice it would jettison its cast and crew out INTO SPACE! That’s why we’ve been subjected to cinematic indignities such as Jason X. Thankfully, Papirmollen wrecked the wretched grade curve on that one when he launched the almighty Parlamentarisk Sodomi into the astral expanses with his latest one-man-grind-awesomeness project PSUDOKU (apparently, it’s an acronym).
Oh, the Norwegian auteur opens Space Grind with a series of riffs that wouldn’t have been out of place on a Parlamentarisk Sodomi release, but out of nowhere everything gets all The Locust. IN SPACE! Rubber bass runs get funkdafied, slithery riffs and electronic experimentalism collide like doomed galaxies in chaotic bursts of Big Bangin’ energy. In fact, while Mollen rubs his tonsils raw, the keys and crazy strings, in their own way, substitute for and augment the vocals in unique and perplexing ways, adding an amazing extra layer to what could have been another expected (though awesome) grind album. And that’s the key; the soul of Parlamentarisk Sodomi is still lurking under PSUDOKU’s outrageous riot providing that necessary anchor to something recognizable. Now there are new additional layers that will need to be processed through repeated, attentive listens. Additionally, Space Grind’s A side (I got the cassette version) is relentlessly, exhaustively high energy. While side B tends to get looser and more experimental, this is an overwhelming listening experience that could easily stand toe to toe with Orphan on an adrenaline level. Yeah. I just said that. This is an album that leaves me physically exhausted and emotionally spent at the end.
Parlamentarisk Sodomi was something undeniably awesome, but PSUDOKU is something unique, which may be even more exciting. No matter what pseudonym Papirmollen adopts, dude has proven once again that he is a perennial album of the year contender. Norwegian grind, my god, it’s full of stars.

[Full disclosure: Mollen asked Revulsion to provide me with a review copy.]
Posted by Andrew Childers at 8:14 PM

This record is fucking perfect. PERFECT!!! The only thing MORE PERFECT this week would be the announcement of our freakin franchise coming home!!!

I love this release so much! I heard the demo ages ago, and didn't really feel the whole space thing behind it (perhaps due mainly to at the time my obsessive Gigantic Brain listening), and to see it jump to something amazing like this is doubly impressive.

I have been really impressed by what I've heard thus far!

His bandcamp site said this shit would be out in digital/CD format in March. I guess he got his calendar fucked up, being in the future and all.

I don't buy cassettes because it's 2011 but the album is available digitally on Amazon here:

been too busy to write a real review, but I wasn't too much of a fan. Hated the production and I don't think it was my cup of tea. That said I really should give it another handful of listens.

LOL yeah, I was refreshing the bandcamp page like crazy during entire March.

@ Digestion: Thanks for the heads up!

FM: i didn't get it at first but i'd really recommend spending some time with it. one day it just clicked and since then i can't get enough.

angry: if we can't get you the once and future jets, would you be in our attractive leasing package for the panthers?

when i listen to grind i want my ass chewed up and handed to me. this is chill music, like for commuting to/from work or running errands. it's got the initial rush that gets me over the fact that i hate ever single person on the bus rubbing shoulders with me. then it smooths my edges so i can read a book.

pxsx meets primus. it's a down year if this is top-10 material.

CD version is out now. $8ppd inside the US, $11 ppd for the rest of the world. torturegardenpictures@hotmail.com

I meet your panthers and raise you a thrashers....

aight, angry, my last offer: you take the fucking hawks and wings on the condition that i never have to see their fucking asses in the central again.