Blast(beat) from the Past: Into the Gore

“Finally, there are the idols of the market place.”
This was the easiest of all to imagine: an alabaster idol towering over the swarming crowd in a market place.
“The idols of the market place are the errors which result from the communication and association of men with each other. They are the errors a man commits because it has become customary to use certain phrases and formulas which do violence to reason. For example, ‘Enemy of the people!’ ‘Not one of us!’ ‘Traitor!’ Call a man one of these and everyone will renounce him.”
Shulubin emphasized each of these with exclamations by throwing up first one hand, then the other. Again he looked like a bird with clipped wings making crooked, awkward attempts to fly. 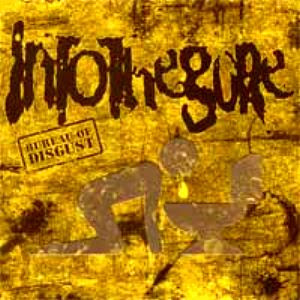 Into the Gore
Bureau of Disgust
Blastbeat Mailmurder
2006
I’m sure you’ve all heard the hoary bromide about legislation being a lot like sausage – nobody wants to see either being made. While I have yet to secure my dream job running the stun line at the local slaughterhouse, I have been exposed to the legislative meat grinder at the municipal, county, state and federal levels (occupational hazard). Yeah, you’re probably better off not knowing the full depth of the venality, petty grudges and craven horse trading involved.
While Greek gross-out artists Into the Gore’s monicker and aesthetics may suggest they’re preoccupied with squishy innards, it’s actually sleazy politicians that get teed up for their death-inflected grind lashings on second and final album Bureau of Disgust (the band split up shortly after the album when vocalist/guitarist Michael-Alexander Xidas died in an accident).
Musically congruent with someone like Sweden’s Sewn Shut, Into the Gore is a band that knows how to punctuate a song with little moments that jar you out of complacency: a double kick drum fill, a pick slide scratch or a shifty riff switchup. Opening bid “The Sculptured Disparity” is an excellent howdy do, showcasing Into the Gore’s M.O. and nifty bag of songsmithing tricks. It interweaves grind rashness with death metal physicality. Those death metal flecks may be the secret spice in their sauce that gives them their own verve and flair from a crowded grind field. There’s a double bass drive (think Keitzer) to Into the Gore that gives them a restless propulsion not typical of grind. The call and response quality to the vocal switcheroos gives both the screechy screams and very Vader death rattles their own distinctive quality, deploying them with purpose and precision.
And since we accept music as a physical article is swirling the toilet bowl, I also have to single out the impressive digipack packaging for particular praise. The puking man logo on the cover has been cut out, given the packaging a unique pop and visual depth and intrigue that reminds me (sadly) of what digital musical lacks.
Altogether, Into the Gore were practitioners of a sturdy, admirable death grind grumble with packaging that justifies the purchase.

Labels: blastbeat from the past, bureau of disgust, greece, grindcore, into the gore

Ok, this could be pretty cool. I'll go find out soon.