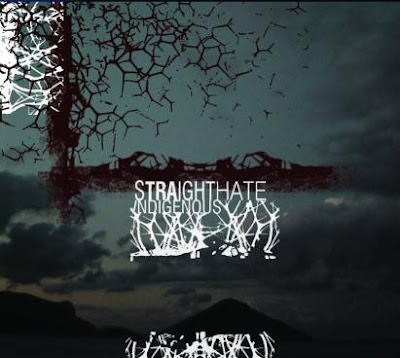 StraightHate
Indigenous
Blastbeat Mailmurder
2007
Nicking a name from a great song from the last album Sepultura ever recorded before breaking up forever is a great way to weasel your way into my good graces. If one of you so much as whispers the name “Derrick Green” I will gut you and feast on your raw spleen. Go ahead. I dare you.
Anyway.
Prior to their involvement in Greek grindonauts Dephosphorus, vocalist Panos Agoros and guitarist Thanos Mantas were the backbone of the more traditionally grinding StraightHate. (On a somewhat related tangent, Dephosphorus have hooked up with 7 Degrees records [run by Keitzer bassist Simon] for a vinyl pressing of the incredible Axiom EP. Get that shit.)
Indigenous is not nearly as unmoored from terrestrial concerns as Axiom. In fact, its mundane grievances about church and state are certainly familiar (but bonus points for “You’ll Never See Heaven,” which purports to relate a private conversation with “that motherfucker Jesus”), and the music slots comfortably within the mainstream of contemporary Euro-grind with flashes of the Scandi-sound (the thorny prickle of the Nasum-ish “Isolator”) and more continental fare. The screeches border on black metal’s demesne and tag out to guttural grunts.
It’s all very comfortable and very enjoyable, a warm, rough-edged production cradles the songs, but then there’s the nearly 12 minute, half acoustic closer “Which One of Us Dies First.” That’s where things get interesting. Closing an album with the longest, slowest song of the album, typically a half assed attempted at dirgey doom, seems to be an irresistible compulsion for grinders (seriously, what's the deal with that?), but StraightHate’s indulgence hints at the unhinged majesty that would follow four years later. At its heart, yes, it’s another grind band playing a slow song, but “Which One of Us Dies First” smashes together Amebix crust and Neurosis atmosphere in a crust punk super collider before giving with to an acoustic halflife
Indigenous is a cool enough album on its own, but StraightHate is far more interesting for its hints of what was to come with Panos and Thanos’ next endeavor.

i like you, bill. you're a funny guy. that's why i'm going to kill you last.

But seriously, I will check this out. Glad to see Dephosphorous is getting a release, also!

Does this mean you're not a fan of Holy Terror style hardcore Andrew? Ringworm, Integrity(Derrick Green), Gehenna, Rise and Fall?

no i'm not. my idea of hardcore pretty much begins and ends with bad brains.

Hey, you can now listen to the entire album online here: http://blastbeatmailmurder.bandcamp.com/album/indigenous-bb007