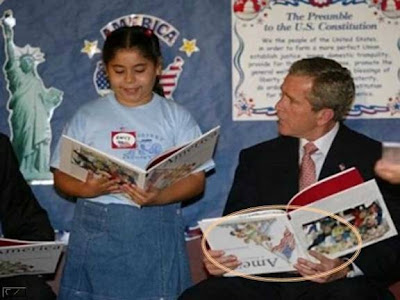 Yes, I have previously bitched about bands slapping Dubya’s simian mug on albums to score a cheap “political” point, so I assume that makes me a flaming fucking hypocrite now. But c’mon. It’s W, and there is a point to this. This time out we’re treated to the martial madness of both Warscars and Warsore, which reminded me of Get Your War On, possibly the only good thing to come out of eight years of the Shrub’s misrule. Too fucking bad half of comic’s jokes could just as easily apply to Obama.
And that’s really fucking depressing. Ever get the feeling you're being cheated?
On a happier note, your letter W mixtape [Mixtape]:

Ha, didn't expect to see Wire on here. No recommendations for this one, more black metal bands for W than anything.

Oh, I lied; need some White Eyes on here for sure.

Worlds are from Florida, dawg

shit. you're right. got them confused with somebody else. thanks for catching that.

No problem at all.

By the way there's another band called World Downfall from Japan and they are way cooler than the German one. They have a split with Nashgul and a 6 track EP you should check out when you get the chance (after you listen to No Qualms!).

I second Brutalex's better World Downfall, they also have a good split with Agathocles too.

actually, that may be the japanese world downfall. it came off the grindbastards comp from japan. i didn't know there were two.

if they were german their name would be something like der discfargengemuchlitchordanceleit zuaxisarchensachsenhausen.

That would be AWESOME.

I aneurism a little bit.