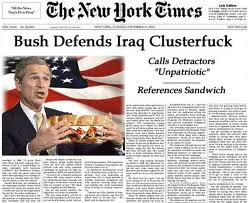 The first round should be over now. But nooooooooooooo Chaosphere got his/her/its/their votes in under the wire and had to fuck it up. For the first time in Grindcore Bracketology history we have not one but two ties. This is why we can't have nice things.
Here's how it went down.
The Old Guard
Pintado sieged Habelt's power in this round, causing the Siege guitarist's world downfall (I apologize for that whole sentence) by 13-3.

The Innovators
You guys deadlocked between Johnson's consistent history of grind innovation and Borja's promise of continued evolution by 7-7.

The Punks
Rotten Sound placed two overall last time we did this. Guitarist Aalto won't even make it out of the first round, squashed by Rasyid by a perfect 16-0.

The Technicians
In the least popular matchup of the lot, Antigama's Rokicki and Psyopus' Arp got all stranglefucked together at 5-5.

So that means we can't move on to the next round because I can't reseed the matchups. Ergo, we enter the lightning round. Once again our contestants are:

This week's challenge is to go back over the comments from the last round and tell me who most convincingly argued their case in these two matchups. I'll pick the two best arguments and those people's picks will move on. May the best argument win. Once again you've got until Sunday. Don't fuck this up too.
Posted by Andrew Childers at 7:02 PM

Alright guys. I won't argue that Maruta had a pretty excellent album with that last one. But, for me, personally Richard Johnson is pretty much unfuckwitable. Let's put it this way, there is no way he's going to be playing on a jazz fusion album in the near future... Think about it.

Chris Arp should win this round because, as bad as the most recent psyopus was in places, he's still probably the most skilled guitarist of the bunch, and Our Puzzle Encounter Considered has some of the most innovative guitar playing ever to appear on a grind record. Antigama is kind of meh, to me at least.

ah ah ah. read the directions, my good sir. i asked people to nominate the best argument from the last thread. no fair making your own argument.

Damn. I was never good at that who "following directions" thing.

"I'd totally die before I call Psyopus a grindcore band, but I'm totally enjoying this tom-foolery of fretboard silliness. Reminds me of one of my most hidden dirty secrets: I like Beneath the Massacre's first EP.
Something about sterile sounding guitars flipping the fuckout. "
Perpetual Strife said it best.

Shane: I don't want to burst whatever bubble might exist with all of this crap; but as far as I know that wasn't a vote. So i don't know if that counts.
2. vote goes to myself for Johnson as most people jsut said "badass" or Dissected talked more about his heartbreak over the choice.
3. no one had a good reason for the last bracket; get rid of them both i say.

There weren't really long arguments about borja being the best, but this pretty much sums up why I voted for borja.

oh..and for the tie i voted for arp, but honestly i could care less who makes it to the next round b/c those guys don't have a chance in hell.

I really hope Borja makes it to the next round

DesiccatedVeins said...
"The Innovators
Huh, kind of a tough one. Dick Johnson definitely did his part to shepherd grind safely out of the '90s, and for better or worse, Borja taught us what meaty-as-fuck Discordance Axis riffs sound like. Maybe it's 'cause I'm guilty about sending one Rob Marton worshipper through already, or maybe it's because Fractured Theology is sounding really good right now, but I'm gonna vote Johnson."

I agree with him, except Borja is way more of a follower of Luc Lemay than he is Rob Marton. In any case, Johnson all the way.

If it weren't contrary to the vote I made (and should have articulated my reasoning behind better) "Brown power" would definitely be my favorite argument for any one of these candidates. But as it stands, and since I won't vote for my own, I'll go with Strife's:

"Johnson
Never been much of an Enemy Soil fan, but since This Comp... I've come to really like Johnson's ability to sneak rock n'roll riffs into a grinding punk slop of mind-tempo extremity. Maruta's latest effort did nothing for me and the guitar playing sounded so sterile and clouded. Reminded me of Malignancy, but somehow more one-trick-ponyish."

Well that'll teach me to vote.

Since Wet nightmare has already used my reason I guess I'll back my self with me saying
Innovators
Borja
Definetly a unique and original style of guitar playing.

As for the second, I'll go with Ryan Page's convinging argument.
"Arp"

i know, right? what's up with you coming in, abiding by the rules and making cogent, well thought out arguments in favor of your position? i'll overlook it this time, but don't make a habit of it. you'll ruin our reputation as the leading source of grind-related fart jokes.

I've been reading this blog since the last bracketology. Thought I should join in eventually. Don't worry I know all about various genra related farts.

Speaking of rules, I wont tell if you swap Arp for Marton. No one will notice.