Panic! at the Discography: Looking for an Answer

"Matthew, Mark. Luke and John are a bunch of practical jokers who meet somewhere and decide to have a contest. They invent a character, agreed on a few basic facts, and then each one's free to take it and run with it. And the end, they'll see who's done the best job. The four stories are picked up by some friends who act as critics: Matthew is fairly realistic, but insists on that Messiah business too much; Mark isn't bad, just a little sloppy; Luke is elegant, no denying that; and John takes the philosophy a little too far. Actually, though, the books have an appeal, they circulate, and when the four realize what's happening, it's too late. Paul has already met Jesus on the road to Damascus, Pliny begins his investigation ordered by the worried emperor, and a legion of apocryphal writers pretends also to know plenty. ... Toi, apocryphe lecteur, mon semblance, mon frere. It all goes to Peter's head; he takes himself seriously. John threatens to tell the truth, Peter and Paul have him chained up on the island of Patmos. Soon the poor man is seeing things: Help, there are locusts all over my bed, make those trumpets stop, where's all this blood coming from? The others say he's drunk, or maybe it's arteriosclerosis. ... Who knows, maybe it really happened that way." 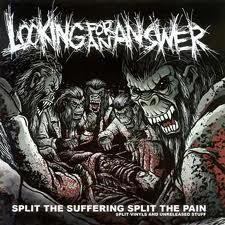 Looking for an AnswerSplit the Suffering Split the PainDeep Six2010
Looking for an Answer may have had the most immaculate conception since Athena bored her way out of Zeus' noggin fully formed. Even when they were just a couple of guys tooling around with a drum machine, the raging Spaniards showed a poise and songcraft that set them apart from their peers as evinced by this early efforts compendium. Once they roped in live drummer Moya (who collaborated with vocalist Inaki in the semi-legendary Denak), Looking for an Answer became truly incendiary. The evolutionary growth from their earliest material, categorized chronologically, through their pre-Extincion offerings is almost operatic in its sweep and only becomes that much more impressive viewed through the hindsight lens of the awesome Eterno Treblinka.
In fact, just about any song at random from Split the Suffering Split the Pain could have been lifted and dropped on to the later albums without arousing too much comment. "Voluntaria Ignorancia's" thrash riffs meet blast beats could be the long lost twin of Extincion's "Ruptura." The (finger picked?) bass garbling of "Invasion" and "Verdadero Enemigo" bring to mind the more lofi, Repulsion Jr. scummery of La Caceria. Driving Looking for an Answer's best work is that slab-sided, grim visaged death inflection that adds a menace that punk alone just can't provide.
This is one of those rare discography records, like 38 Counts of Battery, that works perfectly well on its own as a self-contained album experience. Learning more about Looking for an Answer's past can only make you more excited for their future. Give them 60 seconds and they'll give you an awesome song.

Posted by Andrew Childers at 8:11 PM

I'll have to give this a shot. Really came to like Eterno and this band. Between them and Nashgul (who's coming for two NYC dates) Spain's got talent.

Spain does indeed have talent. I wanna check this album out for sure. If nothing else the awesome artwork.