Blast(beat) From the Past: Attack of the Mad Axeman

"Man is the only creature that consumes without producing. He does not give milk, he does not lay eggs, he is too weak to pull the plough, he cannot run fast enough to catch rabbits. Yet he is lord of all the animals. He sets them to work, gives back to them the bare minimum that will prevent them from starving, and the rest he keeps for himself. Our labour tills the soil, our dung fertilizes it, and yet there is not one of us that owns more than his bare skin." 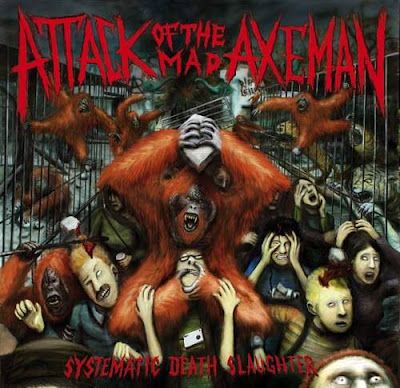 Attack of the Mad Axeman
Systematic Death Slaughter
RSR Records
2011
We could probably argue ad infinitum about the desirability, artistic merit, cultural implications and ironic intentions behind a grindcore cover of "Who Let the Dogs Out" (yes, that "Who Let the Dogs Out"), but, accepting as a baseline the infinite monkeys model of the multiverse, it was bound to happen. Inevitable even. So with that as a precondition, who better to tackle that questionable bit of grindcore infamy than Germany's Attack of the Mad Axeman. So yes, a grindcore version of "Who Let the Dogs Out" does exist, Attack of the Mad Axeman did include it on latest album Systematic Death Slaughter and it took me a good half dozen listens before I even realized what those while blastbeat furries had done. So all in all, it's about the best outcome that we could all hope for from the situation.
I must be slipping because Attack of the Mad Axeman managed to slip their third album past me late last year and I'm pissed because it's another corker. Like an old fashioned spring-driven clock wound too tight, Systematic Death Slaughter is permanently poised on that cusp where the tension becomes too much and various gears and clockworks go exploding into temporal shrapnel. But they deny you that combustible release. Instead, they keep you on your tiptoes the entire 20 minute runtime.
Otherwise Axeman's lyrical preoccupations remain unchanged, launching with the mauled by bears tale of Timothy Treadwell (he of Grizzly Man ... fame [is that really the right word?]) with "Don't Mess with Mr. Chocolate." From there Systematic Death Slaughter is all anti-Disneyfied tales of animal uprisings, Knut the bear, survivalist revolutionaries and other stories of chattering beasts. Sonically, Systematic Death Slaughter represents a further refinement from Scumdogs of the Forest, but Attack of the Mad Axeman still err on the side of the grim and grisly. Two legs bad; four legs grind.
Posted by Andrew Childers at 7:59 PM