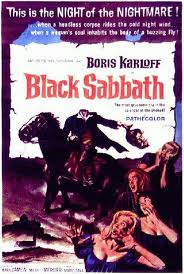 Considering Black Sabbath single handedly (more or less; suck it, Blue Cheer) invented this heavy rock thing we all love, it takes gigantic hairy balls to nick not just one of their songs titles but their namesake song. However, that's exactly what happened in 1999. Though to be fair, Black Sabbath did steal their name anyway. I guess it all evens out.

Swedish noisecoreniks Breach swiped the name of the gods on album Venom, an unheralded gem of second gen noise rock that lands somewhere in the sweet coital space between Converge and Anodyne. Rather than a doomy dirge about a lovely midnight dinner party with Satan, Breach make their "Black Sabbath" a scraping noisy hardcore freakout.

And just because I love them so much, here's Australia's sludge monsters Halo absolutely pounding out the tale of the most atramentaceous Sunday in history.

Posted by Andrew Childers at 7:07 PM