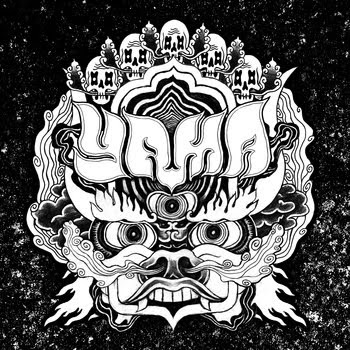 Yama
Seaquake
Mind Flare
For all of Seaquake's nautical themes, Yama's three song stoner dude excursion to Hindu hell is desert dry. Rather than billowing swells crashing against mossy rocks covered in seagull shit, Seaquake sounds more like a parched sirocco scraping through an arid sagebrush plain. Like a scorching summer, Seaquake starts out seasonably pleasant, but it grows a bit more suffocating as Yama drag on. With only three songs and 20 minutes of baked doom, that causes a bit of a problem in spots.
First off, the Dutch quartet's influences nod to the obvious: Master of Reality, later Sleep and the sunbaked Sky Valley where Kyuss would hang out taking drunken pot shots at gila monsters. Everything starts off strong enough. Lead track "Hollow" is the best of the bunch, a head nodding jam that thrums with a nicely throbbing rhythm that will cradle and comfort whatever recreational pharmacopia you choose to augment your musical experience. Vocalist Alex's stab at a Layne Straley croon is at its loosest and most vibrant even when he's yowling nothing more complex than a prolonged "Hey, yeah."
The subsequent two songs, "Seaquake" and "Synergy," are a bit spottier. The title track's dusty blues (you can practically see the grit blowing out the rusty harmonica) becomes increasingly desiccated, teetering on the verge of inertia. "Synergy," a seven minute seminar on a single riff, tumbles straight over into stasis. Sleep proved with Dopesmoker that a single riff could be transcendent, but "Synergy" is less than the sum of its parts. The monotonous vocals and unidirectional riff don't cohere into something that elevates your brainwaves through warping reptition.
"Hollow" proves Yama can pen a quality tune when they have half a mind. Now they need to work on crafting a coherent album experience. As strong as Seaquake started, it withered rather than flourished under the scorching noonday sun.

One would only hope the band would hear the barman's call a bit earlier, no?

Sleep worship's never been my thing, but great review-love that opening paragraph. I'll skip for sure, but had to chime in with Eliot being brought up.

"Shall I at least set my lands in order?"