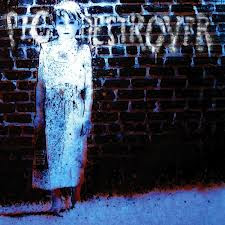 Pig Destroyer
Book Burner
Relapse
Pig Destroyer have wrenched a number of unpleasant emotions from me over the course of their five album career. Most obviously, there's the morbid fascination you get driving past a nasty fatal traffic accident. Then there's the sickening self-loathing I feel when I recognize the worst aspects of my personality reflected back in the J.R. Hayes' madman scribblings. Hayes' lyrics can also force me to recoil in disgust at his relentlessly jaundiced take on life, particularly his interaction with women. But the one sensation their previous albums had not prepared me for was indifference.
Book Burner is an average Relapse grind record. Taken as that, I'm sure some people will find plenty to like. While I've loved everything Pig Destroyer have done before (Yes, Phantom Limb included), this made almost no impression. The past few years have been tumultuous for Pig Destroyer as they've been plagued by constant turnover behind the drums and a few false starts before they were able to get serious about writing and recording Book Burner and that toll sounds obvious here. This is a band that sounds uncertain and strained.
While the album is full of shorter, grindier songs in the vein of their 38 Counts of Battery material with just a small handful of longer, more involved tunes that take after Phantom Limb, they're missing that primal intensity that set them apart. Scott Hull is one of the most prodigious musical talents in all of metaldom and I kept waiting for that signature hook to come -- a "Sheet Metal Girl," a "Carrion Fairy," a "Thought Crime Spree" -- but it never showed up. The closest we come is the fishtailing end of "Valley of Geysers." You'd also be forgiven for forgetting Blake Harrison is in the band because his talents are being severely underutilized. The much ballyhooed addition of Adam Jarvis seems to have imported the worst aspect of Misery Index as well: that lifeless, emotionless drumming. Jarvis' playing could probably be timed with an atomic clock, but he doesn't generate a single significant emotion throughout 30 minutes of music. If there's a bright spot to be had, it's that J.R. Hayes still sounds pissed as all fuck. The short story he contributes to the expanded edition of the song is nothing memorable, but he's still slitting his musical wrists and laying it all out with his performance. (Likewise the bonus album of punk covers is demo quality, by the numbers takes of familiar songs that doesn't take them anywhere new.)
Pig Destroyer have been at the acme of grindcore for more than a decade. When I defend the notion of grind as art, I point people to Prowler in the Yard and The Inalienable Dreamless. But Book Burner falls short of the standard they've set for themselves with past efforts.  Everybody is entitled to an off album. Hopefully this lineup is stable and the band can gel and really find their footing because next time I want to feel something.
Posted by Andrew Childers at 8:21 AM

Snap, I found this album bland at the best of times.

It's nice to read something different from people saying that this album is the most amazing thing ever. The details of my judgement are actually reversed ( I think the music succeeds while most of the lyrics fall flat), but it's nice to know that I'm not the only person slightly disappointed by this album. But maybe it's because "PitY" is so good.

I totally agree with this review. My impression of this album was also somewhat spoiled by the lame promotion from relapse (80 different versions and one that costs 100 dollars because you get a lighter or something), and that horrible, horrible video they released with the machine gun monkeys that looks like low rent Mastodon. I miss when there were three t-shirts to choose from and no-one knew about this band. I guess this really is just how it goes any time a band comes across a modicum of success. Sad.

My second or third listen was kinder than my first, but I still doubt I'm going to give this one a ton of replay. Pretty much everything everyone else is saying has been my experience with this album. The promotion and visuals, like Ryan mentioned, really were the worst part of this album lead-up; I wasn't impressed by any of the videos that were released, and I still kind of hate the treatment that J.R. or whoever gave the cover photo. I've never been a Misery Index fan, and despite Jarvis' obvious skill (they released some pretty impressive in-studio footage of his chops) he still carries around with him that cold, deathcore approach to drumming that gives me the dry-heaves. As for Relapse, they're consistently giving me more to hate every time I'm drawn into their orbit of mediocrity.

I think some of the "lifeless drumming" is due to how well he learned Scott Hull's demos. From an interview with Operation Grindcore:

"In fact, most of my drum machine demos are intended as a rough sketch but to Adams credit he really came in and just learned the drum lines verbatim, which blew me away because I wasn’t expecting that. So even the little drum fuck ups that I would program, he learned those and he would actually do them in the studio. He was actually ready to play some of these songs without any accompaniment."

Anyway, while I agree with most of this review, I feel that the record is a grower. Not as great as previous efforts for sure, but it's got some really good songs - especially "Eve," "Valley Of The Geysers," and "Permanent Funeral."

That said, and as Rich's mentioned above, I feel J.R. lyrics are a little stale this time around. Lines like "Your holy war's a joke to me / I live the life I want to lead" and "I think something stirred in her mahogany eyes / like a turtle in a dirty river" made me cringe a little the first time I heard/read them.

Regardless of that - the band seems pretty reinvigorated, so I'm optimistic for their future.

I agree with Ryan here. The only thing worse than that music video was the song itself. Jarvis is a somehow more robotic and boring clone of Derek Roddey and the album really lacks any kind of imagination or emotion.


The artwork's awful, songs are boring and those covers were some of the worst I've ever heard a band do. It's a real shame as I'm starting to think Prowler in the Yard was a mistake; they didn't mean to be that good.

Nice review, and happy to see you're not hitting the h-train again and claiming this one's good.

i love it. there are plenty of memorable riffs in here for me. i can hear new influences for hull. it didnt take long for me to have this album memorized. i do miss some of those fills harvey did though. p i t y will always be my favorite ,especially the production, but i've listened to this a lot.

I'm with Patrick: I really dig this one! I loved Phantom Limb, and this strikes me as basically following that trajectory but grindier.

I think Jarvis was a great addition and a beast behind the kit. But, I like him in Misery Index, too, so there you go. I will agree that Blake doesn't seem to add much to this one, unless I just keep missing something.

The first time I put this in I felt like I had bitten down on a power line, and I've been returning to it very frequently.

i (mercifully) avoided all the publicity/hype on this one (except for decibel's review) until i actually had the damn thing in my hands. so i'm just now starting to see how people are reacting. it's a pretty interesting dichotomy though. nobody seems to be must meh about it.

also, bill, after all these years is this finally the first time i've steered you wrong? dun Dun DUN!

For me, the songs themselves are, for the most part, not bad, its just that the production is clean to the point of feeling empty. Its like, when I'm demoing a track and its just unmixed Superior Drummer and guitar. That combined with the peripheral elements all taking a turn for the worse, its just not up to par. I mean, ironic sampling of 50s politicians or whatever, what did you just have some left over Korn samples (for transcription to those t-shirts of the retro guy with the pipe) laying around and couldn't see them go to waste?

I'm not really a fan of their samples/electronics guy. I think it was better when scott hull was putting it together.

No, no, your streak isn't affected by this!

We've disagreed before, but I've never checked out a hitherto unheard band on your recommendation and been disappointed.

That, to my knowledge, is still the case.

Interestingly enough, Scott was the one who picked those samples (or at least the one that opens the album): http://pitchfork.com/features/show-no-mercy/8982-the-underground-men/

The ultimate irony here is that PD sound stale and sterile compared to a vibrant scene of grind bands that their earlier work has certainly helped create.

Glad my ears are not broken and that I'm not alone in finding this album mind-bogglingly boring.

Couldn't agree more. Especially with the "Atomic Clock" comment. It seems like the notion of "tightness" that has swept most of guitar-based, louder music via grid-edited drum perfection is poised to destroy grindcore as well... it's fairly difficult to draw any zeitgeist or tumult from what is essentially a machine disallowing human deviance in musical form...

It's more likely to be the production method than his playing.


maybe I did not listened to book burner enough to have a really informed opinion. but the reason I ddn't listen to it a lot is because it did not make a great impression on me. it didn't manage to grab me.I think without Pig destroyer stamped on it maybe I wouldn't have listen to it entirely...hope they'll do best next time...

Most of the guitars sound good to me, just without really any standout parts. But all of Hayes vocals feel buried in the background. That was the saddest part for me. With all the guest vocals it felt more like AnB, especially with Jarvis' drumming. Even with these criticisms, I did enjoy this one.

I enjoy the album, but it falls short of Pig Destroyer standards. Iron drunk is the only song to stick in my head and move me the way damn near all the songs on phantom limb did. Jr has a few great lines throughout, and I dug the short story. However I miss Brian's drumming, I'm sure Jarvis is technically a better drummer but he lacks that edge of your seat, chaoticness of past efforts.