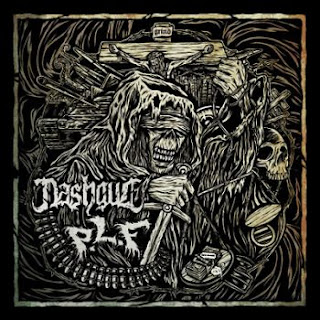 Nashgul/P.L.F.
Split
Bones Brigade
Nashgul have always had a cinematic quality to their ghoulish grind, whether it's their penchant for sampling horror and action flicks or the flickering celluloid flash of their grisly slasher tunes. El Dia Despues al Fin de la Humanidad was probably the best zombie flick that has yet to crash a cinema near you. But I had never had the same epiphany about Texas' P.L.F. until they paired up with Spain's grind morticians for these seven wonderful inches of madness. Now I'm a willing to drop a few bucks on Kickstarter to roll cameras on their self-professed Texas Grindcore Massacre.
Nashgul know that a good horror flick is much as a matter of anticipation as it is the kills. So they take their sweet time easing you into the proper mood with Blind Dead-paced instrumental opener "The Trip" before they start slitting musical throats. Once they do unleash the beats, they're off at a (heretical to be sure) running zombie canter for the next three jams that pick up right where the last album left off. That should be pretty much all you need to know.
Flipside, P.L.F.'s horror show is certainly more modern in approach, diving camera-first into the ruptured joints and organs of the hapless listeners with two new songs and a seamlessly integrated Phobia cover. They're driven by a guitar tone that skrees like power tools winding up. That tone perfectly serves P.L.F.'s Megadeth on fast forward riffing-- and I mean good Megadave back when he was addicted to heroin instead of Jesus and rightwing crankery. It's good enough to make me overlook the (guest written) lyrics to "Arena of the Gladiator," which are bombastic and bro-tastic enough to make Manowar faint from shame. But dammit this is grindcore Thunderdome and some things just have to be overlooked.
But really, none of the preceding 300 words even should have been necessary. You know god damn well you need this in your life. The cover even features Jesus being crucified in the name of grindcore. How can you pass that up?
Posted by Andrew Childers at 7:43 PM

I take it that cover didn't happen in Poland...

didn't know this is out, must grab it!

never really cared for plf, but they were great at mdf and their split with in disgust was great too.

I hear good things about the Nashgul / Malpractice Insurance split too.