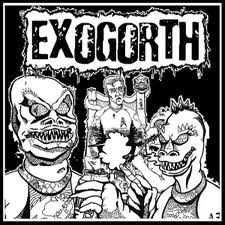 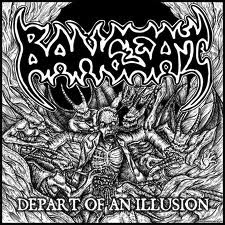 Bangsat/Exogorth
Depart of an Illusion/Split
Grindfather/Incursion/Opaqus/Witch Bukkake
I've always had a soft spot for Bangsat even when, as on their split with Archagathus, the parts just didn't seem to be coming together. There was just something about the Indonesian trio that suggested they were on the cusp of joining that rising tide of awesome Asian grind that includes scene leaders Wormrot as well as Compulsion to Kill and SMG. With their latest 7-inch split, they've really made great strides toward mastering their grind.
Over six originals and an Extreme Noise Terror cover, Bangsat bang heads with the right mix of lo-fi and high energy that keeps me coming back for more blastbeats. The riffs are all '80s hardcore by way of Scum Side A. The barely-holding-it-all-together blastbeasts create the perfect storm of cacophony. The production is nice and hot letting the songs just shimmer off the wax.
Bangsat are backed up by Seattle space slugs Exogorth who would be just about perfect if it weren't for the annoying, monotonous shrieking vocals. That aside, they have a killer command of grindcore song structure. The fast parts thrash, the (relatively) slow parts chug and they know how to expertly powerslide between the two without throwing off the song's momentum. So they rampage through three of their own songs and a Proletar cover (yeah, me neither) before they bring the 7-inch squealing to a close.
This is a record so fun it took four labels to put it out.
Posted by Andrew Childers at 7:06 PM

Hey! Love your blog. Thought I'd share this band with you. A friend of mine just found this record, and it seems to fit well with your blog.

cool. thanks for sharing that.

Thhank you for this