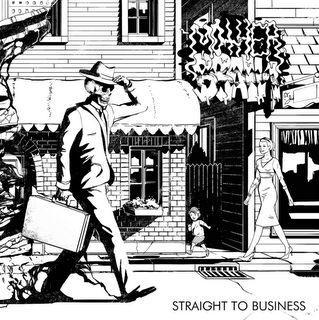 Mother Brain
Straight to Business
Grindcore Karaoke
Mother Brain take their sweet damn time getting down to the grind for an album named Straight to Business. They spend “Introduction,” the album’s first two instrumental minutes, wallowing in sludgy despair. However, I’m willing to let it slide because they didn’t bury it at the end and because their doom haul is actually pretty good. Mother Brain seem to be that rarest of aves that has a firm grasp of what makes a song really click at either end of the speedometer.
Mother Brain, when they do get down to the grinding, recall elements of both Maruta and Pig Destroyer without outright theft. It makes sense because neither of those bands are afraid of varying the acceleration either. The performance is noisy and screeching, with a lived in authenticity to it that upends the trend toward sheeny, shiny production that denudes music of vital energy. Mother Brain also know how to quit when they’re ahead, “Introduction” is the longest track of the lot and when they do blast off into the stratosphere, they keep things exceptionally tight like the 17 raging seconds of “Cut or Uncut.” More often, as with “Old Man,” Mother Brain will mix up the fast with the slow in a single song, refusing the captivity of narrow genre labels. The quality of their craft and the concision of the 11 minute runtime makes Straight to Business compulsively re-listenable and well worth checking out.
Posted by Andrew Childers at 8:32 AM

Very impressed with this. Love the low death metal vox. They remind me of a sludgier Priapus, which is a good thing! Not trying to be insulting by comparing them to a band they might actually predate, haha, but that's what it made me think of.

love this fucking album! Glad to see other bands get compared to Maruta besides us :D

So much stuff on GK, you try and listen to it all but I completely missed this one. Good call!

Very cool EP. They're supposed to send me the 7" sometime.